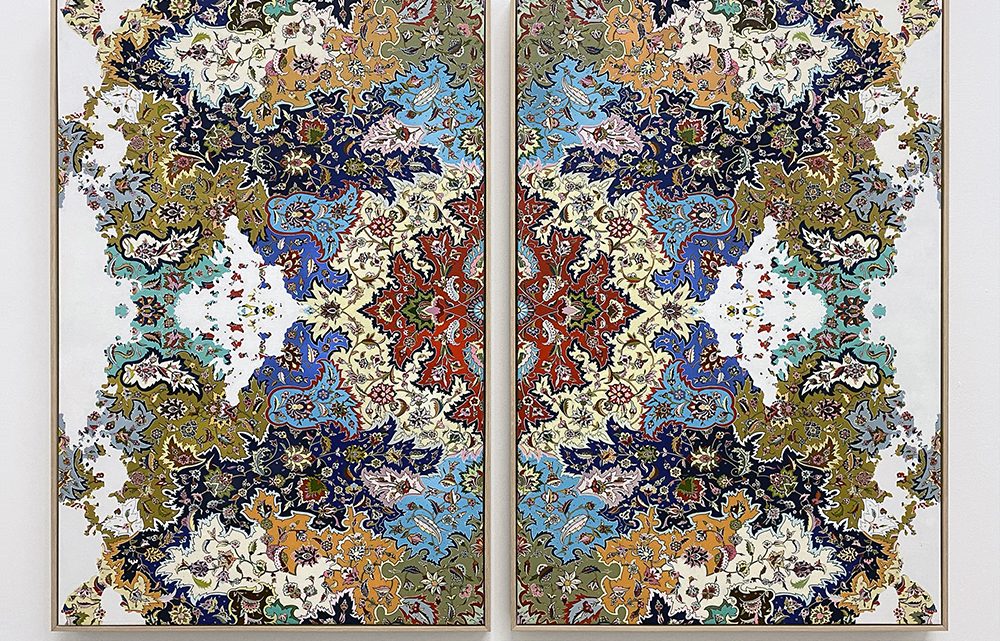 Upon completion of his solo exhibition Nucleus in 2018, Persian-speaking-Syrian-Cuban artist-du-jour Jason Seife, has been building towards his series of paintings inspired by Persian rug patterns: “A Small Spark vs A Great Forest,” which will be on view at Unit London beginning January 6th, 2021.

Born to Syrian and Cuban parents, Seife was raised by his Persian zan-amoo (Persian: uncle’s wife). “I get mistaken for being Persian all the time, sometimes I even mistake myself for being Persian,” shares Seife. “My aunt who raised me is Persian…So I grew up mainly in a Persian home. Despite not being Persian by blood, it was a large part in shaping who I am as a person and artist. I’m glad to be a mix of such passionate cultures and I try to reflect that in my work as much as possible.”

At the heart of A Small Spark vs a Great Forest is an understanding of the collective nature of humanity: whether from North or South,  East or West we are, in essence, cut from the same cloth. This kind of universal humanity has only been emphasized by the Coronavirus  pandemic. Covid-19 has no concern for man-made borders; it spreads indiscriminately, irrespective of race, gender or religion.

Jason Seife looks to take this renewed appreciation and understanding of cultural equality and  explore it by connecting with his Middle Eastern heritage: By studying the skills of craftsmen from different cultures and adapting these  aesthetics, he strives to make these processes relevant to new generations. Seife’s process is tripartite: moving from hand to machine, and then back to hand. He begins by sketching an “outline design” inspired by  Persian rugs. This hand-drawn  foundation is then rendered in 3D using computer software that manipulates color and light, producing a reference image that has  a sense of relief. Finally, Seife zooms in on certain sections of this digital work and begins to meticulously hand paint these areas without the aid of technology.

“In 2018 I spent several weeks in Iran, visited Shiraz, Kashan, Isfahan and Tehran,” says Seife, who admittedly has even spent up to a year working on just one piece. “We always had rugs in my home growing up so it was a large part of my life. As I got older I learned to appreciate them even more and began working them into my artwork…I think Tabriz rugs are some of my favorites, but there are many! I work based on many reference images, either from carpets i have seen during my travels or carpets I own. I then make combinations of certain styles, sometimes taking inspiration from a border of a tabriz carpet and mix it with a medallion style from an Esfehan carpet…There’s a lot of grid work and mirroring similar to how carpet maps are created for actual weavings. Other times I make completely new designs not based on any reference.”

Jason Seife’s intricate paintings fuse traditional techniques from his Middle Eastern heritage with modern materials such as  ink and acrylic, this captures the essence of a particular historical craft for a contemporary audience. Seife’s paintings are meticulously  crafted simulacrums of his oscillating mental states: different colors correlate to the different moods of the artist as he undertakes the  therapeutic process of weaving his emotional state into an encoded tapestry.

In the other works in the show Seife is exploring a new direction, creating unique works based off of the same large images, highlighting  the changes that can occur from modifying mediums and colors. These works showcase Seife’s first use of concrete. Inspired by  building materials seen in Damascus, the artist created a formula for his own kind of mortar. This simultaneously creates an interesting  contrast between the floral patterning of the work and the theoretical foundation of the forest, all while further grounding the work in  Seife’s heritage.

This physical-digital-physical process not only allows Seife to create a more powerful visual experience, it also stresses the notion  that craftsmanship remains at the centre of the artistic process. Although these ideas are evolving and there are now numerous  contemporary artists that have never picked up a brush, A Small Spark vs a Great Forest is testament to the past ideals of both the  artistic process, and the effect it can have on anybody in the world.