Mike Shouhed from Bravo's Shahs of Sunset. Photo via NBCUniversal.

The Shahs are back for another season!

In season 3, more determined and in love than ever, with his girlfriend by his side, Shouhed explores his business partnership with Reza, reconciles friendships and flirts with the idea of making an honest woman of Jessica: Making her the future Mrs. Shouhed. But will Mike’s Mom and Dad give their blessing? (Perhaps Jessica’s pending conversion to Judaism will warm them up to the idea.)

The 34-year-old Mike Shouhed seems to have it all in business, fame, love and a perpetually even tan. Yet, for this ambitious real estate mogul, entrepreneur, and official spokesperson for age-defying skincare NeriumAD®, having it all is not enough.

Sure, all that glitters is probably actual gold for the cast of Shahs, but in the midst of the sparkle and lavish “Persian Prom” parties, each struggles with their inner demons (and some outer ones) as well. And Mike Shouhed is no exception.

If his sexy spread on Playgirl.com wasn’t revealing enough for you, Shouhed promises the most candid and compelling season of Shahs yet, calling it: “Larger than life. Bigger and crazier.  Everything viewers love about the show will be back and better than ever.  The new season is our best yet!  Wish I could say more […] I can tell you I just love the new season, and I have even more fun and craziness than ever.”

We caught up with the hulking reality star to find out what’s in store for us in this new season and the secret to maintaining his debonair and carefully manscaped body in the midst of all the time-consuming melodrama.

What were you up to, this time around?

I can’t reveal specifics before the season premieres, but let’s just say my business and personal lives are both very hectic and exciting, as always, and my business partnership with Reza is definitely put to the test this season.  Nothing is as it appeared before, for sure.  And some new folks around me this time out.

What is your current relationship status?

I’m still dating my girlfriend Jessica, seriously, she’s an amazing girl who takes my breath away and this will be featured on the show.

Do you find that it has become harder to maintain old friendships since you’ve been on TV?

Yes, definitely.  Jealousy unmasks a lot of people for who they really are.  I try hard to stay in touch and close, the show is a show but in the end sometimes a show is an extraordinary thing and it has impact on outside relationships beyond the show.  Something I work hard to counter, and sometimes or often I do.

Do you plan on continuing on in entertainment? If so, what branch specifically?

Television, books, fitness videos.  Sky’s the limit.  Hard at work on it all, currently.  With a strong show it makes sense to extend and expand my reach, and have a ball while in the process.

Have you considered doing a fitness video?

My manager and agent are working on this as we speak, actually.  So I can show and share, and others can enjoy my programmed fitness routines.  It’s a kick.

Runyon Canyon in LA is my favorite for hiking.  Other than that, just a good diet and weights at the gym.  Nothing remarkable, except remarkable consistency.

Do you listen to Persian music while you work out?

No, I just listen to it while making love.  The slower the song, the better.

What is your favorite Persian dish?

Ghormeh sabzi – stew with herbs and lamb.  It doesn’t get any better!

Ever been to Tehran?

I was born there, actually, but left with my parents when I was one-month old and haven’t been back.  We’ll see what happens in the future.

Can you cook Persian food?

No, not the best cook. I wish I were that guy, but I’m not, bummer.

You speak Farsi…Can you read and write in Persian as well?

Yes, though not actually fluently. Want to master it, though.

What was the outcome of the playgirl shoot you did, and how did your parents react to that whole process?

They were shocked at first, but they came around and were supportive, I think.  It’s ultimately my life and my choices, and my parents get that.  They get that sometimes I like to have a lot of fun, and I did.

What Persian values do you feel your parents tried to instill in you the most?

Hard work and loyalty to family and friends, trueness to my love.

What is your favorite thing about being Persian?

The closeness and resilience of family.  Not much different than with Italians and Jews, and so many others.

Do you feel that Shahs of Sunset has had a positive or negative effect for Iranian-Americans, image-wise?

Positive.  We’ve humanized the culture, made it more accessible and taken away some of the stigma that comes with being viewed as “different”.  We counter some of the politically-charged messaging out there in the global media.

Do you feel the critique you’ve received is justified?

No. No one wants to be judged, especially not based on how you are portrayed on TV.

Do you find that most of your fans or Persians, or non-Persians?

Mostly non-Persians, but plenty of Persians, too.  We have fans from all walks of life.

Speaking of fans: What is a funny fan encounter you can retell?

At a club one night a female fan bought Jessica and me some caviar and Dom Perignon before then inviting us both back to her place.  I don’t kiss and tell, though, as to whether or not we accepted.

What do you love most about working on Shahs?

Traveling and hanging out with true friends who know how to have fun.  Stresses and strains, and drama impacting our friendships…Cannot break our friendships.

After having been on the show 3 seasons now, do you have any regrets about anything that’s aired?

“No regrets” has always been my motto.

If you had to create a spinoff from Shahs, what would you pitch?

Jessica and me, growing as a couple and as individuals, but still being crazy […].  But, I’m sure there would be some unavoidable visits from the likes of MJ, Reza and the crew, and others.

Out of your cast mates, who would you rather be stuck on a deserted island with, and why?

MJ because it would never be boring, that’s for sure!

Out of your cast mates, who is the most generous?

Out of your cast mates, who is the most sheytoon?

Me. Always the troublemaker.

Out of your cast mates, who is the easiest/most fun to work with?

Out of your cast mates, who is a friend for life?

All of them, truly.  When it gets toughest between our crew, what we see is nothing is tough enough to break us up. 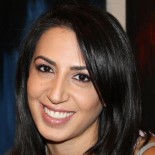 Orly is a freelance writer and editor in Los Angeles.