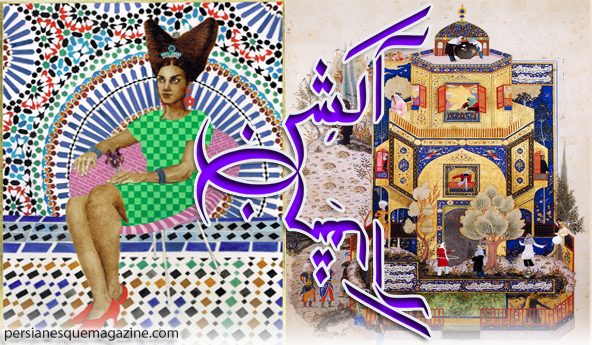 The auction will be on public exhibit at 27 and 28 Cork Street, Mayfair from 17th to 19th September.

A selection of works will be included from the critically acclaimed exhibition: “Unveiled: New Art from The Middle East” held in 2009 at the Saatchi Gallery, London.

The contemporary Persian miniature painting featured in the image above, left, is Iranian artist, Soheila Sokhanvari’s, work. Sokhanvari uses semi-precious pigments, 22 ct gold, Lapis Lazuli, silver and egg tempera on parchment employing traditional techniques used in medieval illuminated manuscripts. The central figure of Shahrzad (Shahrzad is a legendary Persian queen and the storyteller of One Thousand and One Nights) is based on a photograph from the artist’s family photo album dating back to the 1960’s.

The Auction Room, was launched this year by George Bailey, previously Managing Director of Sotheby’s, and Lucinda Blythe, who also worked at Sotheby’s for 17 years. The Auction Room combines the expertise and authenticity of a traditional auction house with the accessibility, efficiency and cutting-edge technology of the online format. The online catalogue for this auction will go live one month before the auction date, at www.theauctionroom.com, when clients can place Lot Alerts: to remind them when to bid on their preferred lots on the evening of the Live Online Auction (September 19th, 7pm: London time); or place Absentee Bids immediately: when the client sets the maximum amount that they would like to offer for a lot and the computer will bid on their behalf, so that if they are the only bidder they will buy the lot at the reserve price.

Both browsing and bidding are possible on any desktop, laptop, android, ipad or iphone.

*For more information on how to bid, please visit: theauctionroom.com/how-to-bid.