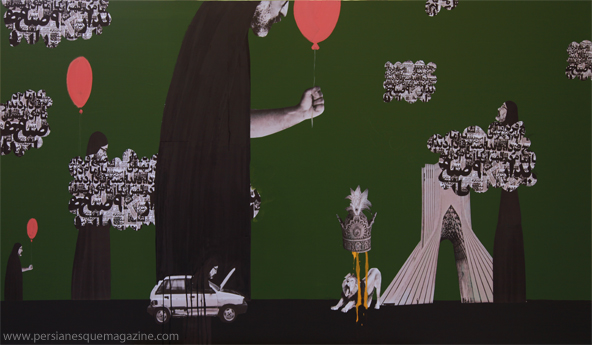 The fourth of its kind, this star-studded fundraising event will include an exclusive Iranian concert at One and Only Royal Mirage on 22nd March, where the internationally acclaimed Shanbehzadeh Ensemble will be performing for the first time in the UAE.  The night will also feature a special performance by Mehran Atash, winner of the Googoosh Music Academy 2011.

The following evening, esteemed guests and art patrons will enjoy an Auction Gala Dinner at the Jumeirah Emirates Towers. This will feature a live show of Bogh-art Jewellery followed by an auction by Christie’s, during which works donated by renowned contemporary Iranian artists will be sold. The auction includes works by masters such as Shirin Neshat, Ali Banisadr and Farideh Lashai, as well as Ramin and Rokni Haerizadeh to name a few.

In keeping with Magic of Persia’s mission to nurture emerging talent, there will also be an exhibition and an online silent auction of works by forty Iranian artists. Curated by the talented Ali Bakhtiari, this “Exhibition of Auction Highlights” will take place during Art Dubai both online and at the recently opened Salsali Private Museum.

Donated works by these young artists will be on display from 12th to 21st March, giving interested buyers the opportunity to view the works before bidding. Bids can be made online until midday on 21st March; at which time lots which have not been purchased outright via the internet will be auctioned live at the Salsali Private Museum during the same evening following a cocktail reception.

Magic of Persia will also be exhibiting photographs taken by some of the young women who recently took part in a photography workshop led by Shadi Ghadirian in 2011. The workshop was part of The Omid Foundtions’holistic program that strengthens the social, emotional and economic competencies of disadvantaged young women, by visually expressing their thoughts about womanhood and femininity. This will take place in parallel with the Exhibition of Auction Highlights at the Salsali Private Museum. The photographs in the exhibition are for sale with all sales proceeds benefiting Omid Foundations.

Funds raised during Magical Nights in Dubai 2012 will be dedicated to sustaining Magic of Persia’s ongoing art initiatives as well as supporting Kids Company, London; the Future Centre for Special Needs, Abu Dhabi; and the Omid Foundations.

VOICES OF THE OTHER HALF – EXHIBITION OF PHOTOGRAPHS

In the presence of HE Sheikh Nahayan Bin Mubarak Al Nahayan

One and Only Royal Mirage, Jumeirah Beach, Dubai

In the presence of HE Sheikh Nahayan Bin Mubarak Al Nahayan