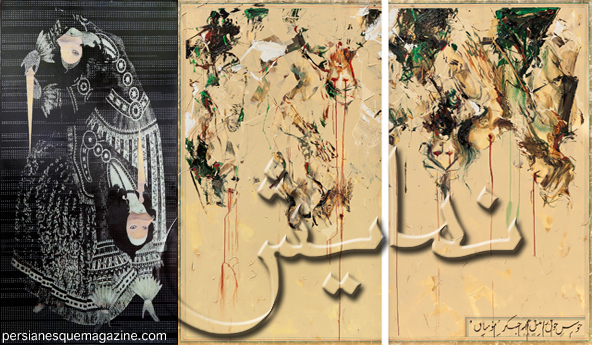 Sadegh Tirafkan works in the field of digital photography. He creates photographs of crowds of people shot from a bird’s eye perspective, connected and interwoven with the traditional technique of carpet weaving. By literally merging the textile with the photograph he creates a hybrid of traditional art craft and the medium of photography.

Leila Pazooki, an Iranian-born, Berlin-based artist, presents works from her series “The Aesthetics of Censorship”. The pictures are photographs of censored pages from art history books in Iranian libraries. By putting these images into original 18th century frames she transforms the idea of censorship and plays with the issue of the so called aura of art.

Samira Hodaei, a young Iranian artist, presents her newest works from her series “Dancing the Sharp Edge”. In a very elaborate way, she sticks little dots made of glass color to her canvas creating a haptic texture. Inspired by traditional Qarjah-style painting Hodaei gives an insight to her own tradtional culture while also speaking about current issues.

And being faced with the latest works of Shahriar Ahmadi we experience loud and expressive gestures heard through the canvas in Ahmadi’s usual bright and wide, yet controlled brush strokes. His paintings are a balancing act between the extreme expression and the figurative.

While, another Iranian artist, Shahram Entekhabi, (mostly known for his videos) surprises with beautifully composed works of acrylic on canvas. His figures are a mixture of different people, different stories, and different worlds merged into one another using the power of color and lines.

Abu Dhabi Art 2011 will be open to the public from Wednesday 16th November to Saturday 19th November 2011.

Next post Bahar Behbahani: The Chronicle of Her Innocence

Previous post Reza Aramesh: "Them Who Dwell on the Earth"