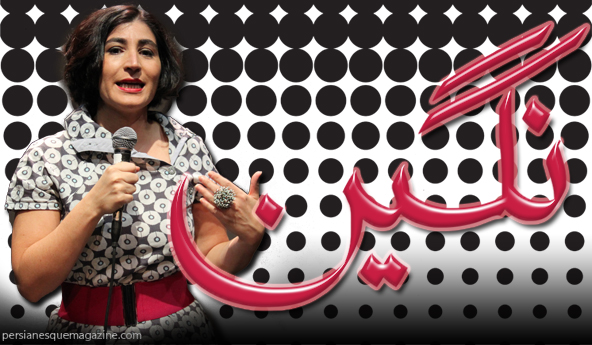 New York-based funny girl, Negin Farsad, is making the rounds and is bound to end up on your list, sooner or later.

An overachiever with a lot to say, Farsad is not only a great performer, but her educational background is impressive too. She has a BA in Government and Theatre from Cornell University and a dual Masters degree in Race Relations and Public Policy from Columbia University. (So, you know she’s got the basics and the smarts to bring the hilarity with balance, Persian style.)

Enjoy our interview with the female stand-up star, below:

PEM: What inspires you in your stand-up?
NF: The inspiration comes from a few different places, like the news, the ridiculousness of our politicians and international diplomacy, my personal life as a gal in New York City, and of course, a hefty dose of my parents because however far away I am from them, their overbearing Persian voices are still in my head!

Do you integrate a lot of your real life into your stand-up?
Oh yes! Real life makes up most of my standup. I think the personal stuff tends to be the funniest–you can really feel the pain of it and it makes for a better laugh. And if I’m imitating people, I get to do a lot of silly accents, that’s a major bonus.

Has this choice created any drama in your personal life for you?
Hmm, interesting question. I had a boyfriend once who was really uncomfortable being the subject of a joke. He actually admitted to feeling “emasculated.” That relationship didn’t last. He was also a cheap bastard, but that’s another story. My family has been remarkably okay with being continually (but lovingly) ridiculed. Though to be fair, they don’t actually see much of my stand-up because we live on different coasts. In fact, if you want to talk smack about people you love, do it 3000 miles away from them, it really helps keep the peace.

What made you choose comedy as a profession?
I got into Drama class as a horribly awkward be-zitted 14 year-old. I quickly found out that I had no problem making a fool of myself on stage. I was a forgotten nerd-face but somehow being laughed at felt really good. My comedy acumen sorta developed from there. College gave me more acting and more sketch comedy opportunities. Moving to New York meant even more sketch comedy and the eventual turn into stand-up. And now, I keep doing stand-up because that seems to be the only way to keep on keepin’ on. It’s addictive.

Being a female comedienne is a tough job, how do you handle the stresses of your industry?
It is a tough job–I think the major difference between make and female comics is that we ladies have to constantly remind industry folk that we have experience. I feel like women are always reciting their résumés–not because they want to but because they have to. There’s an assumption that we’re green even when we’re not. Is it the boobs? I’m not sure. Either way, I still don’t know how to deal with the stress of it. I mostly vent to other female stand-up comics, that helps.

How hard is it to keep your content fresh as a comedian?
It’s hard. It’s very hard. I think it’s important to watch and listen to a lot of other comedians–to watch a lot of great TV (not okay TV or passable TV but the really great stuff). The more you keep yourself in the mix, the closer you’ll get to keeping it “fresh.”

What’s something your fans/friends would be surprised to learn about you?
They may be surprised to learn that I’m awfully schedule-oriented. I’m a task-master, I make lists, I cross things off, I go to bed early. I’m basically the least cool comic – I don’t get wasted that much… well, I have my moments, but even those are scheduled.

What other types of art are you involved in?
I do a fair amount of comedy writing for TV and web clients–I’ve had writing jobs at MTV, Comedy Central, IFC, and PBS. I made a couple of feature length documentary movies (Nerdcore Rising, A Cricket in the Court of Akbar) so I think that technically makes me a filmmaker but it feels a little dumb to say that. These days I do a lot of directing for commercials and ad campaigns. I’m also deeply involved in karaoke but I’m not sure that qualifies as “art.”

What’s a typical day in a female Iranian-American comedian’s life like?
The typical day involves waking up, feeling a pang of uncertainty about my career choices, going to the gym, earning some money (writing or directing). Realizing it’s already 6pm and I have no idea what I’m going to say in my 8pm stand-up spot. Feeling panicked. Revisiting the morning’s uncertainty about my career choices. Writing a new bit. Writing a list of jokes. Doing a show. Feeling like king of the world because I killed. (Alternately: feeling like a piece of irrelevant garbage because I whipped the audience into a lukewarm frenzy.) Watch Jon Stewart do headlines, watch Letterman’s monologue. Feel another brief pang. Go to sleep.

Do you travel a lot for work?
The traveling is cyclical. Sometimes I end up traveling a lot – going to really glamorous places like Cleveland… adjacent. Or that one town between Denver and Fort Collins that no one is sure what it’s called. Other times, work will keep me in New York. I like traveling but it can really wear me down.

Are you single?
For tax purposes I’m single. For love purposes, I’ve gotta dude! At least I think I gotta dude, I should ask him what he thinks about that.

What is your sign?
I’m an Aries!  Where my fire signs at??

What is your career goal?
Originally my career goal was to make a living in entertainment. But I reached that one, and realized that it wasn’t enough. I think my current goal is to get to the point where I am able to make or do whatever I want–shows, movies, tours–whenever I want it. That’s a pretty huge goal so it will probably last me the rest of my life.

How long does it take you to write/create a joke?
It runs the gamut. Sometimes something brilliant flies out of my mouth in the spur of the moment and immediately becomes a part of my set and other times, I’m working on a bit for weeks and can’t get it quite right.

What is your creative process? Do bits come to you during the day? In the car, etc.?
Bits come to me everywhere! The bathroom at Pink Berry? Yes! The bus to Poughkeepsie? Yes! Onstage while I’m telling another joke? Totally!

What is the longest or shortest period of time you’ve spent on stage–and what’s the largest crowd you’ve performed in front of?
The largest crowd was maybe at Town Hall on Broadway–I’m not sure but I think it holds 3000. It could have been the Net Roots Nation annual convention which holds anywhere between 3000 and many additional thousands. The longest I’ve been on stage is something like 2 hours. The shortest was at the UN Correspondents Dinner playing the part of a Ukrainian nurse for 4 minutes.

Any horror stories about being on stage?
The most horrifying and fascinating onstage experience was at the Edinburgh Fringe Festival where I was heckled before I took the mic. They spent a lot of time yelling at me about my rack as I walked toward the stage. Where do you go from there?

Your favorite Persian comedian?
It’s a toss up between Maz Jobrani and Omid Djalili.

Do you speak/read/write Persian?
I speak Farsi and Azeri (my parents are from the Tabriz). It would be a stretch to say I read Persian–I mean, if you give me 30 minutes, I could slowly sound out a sentence.

Do you like performing in front of Persian audiences?
I have had some really great experiences in front of Persian crowds–it’s like a collective feeling of relief, that finally there is a voice that is speaking directly to them. That’s a wonderful feeling. I have had some issues with more conservative Persian audience members that are uncomfortable with my jokes and my lifestyle. Some of them are especially uncomfortable because I’m a woman. Those folks–few in number–probably shouldn’t be going to see stand-up in general. But by and large, I love the Persian audiences.

Do you travel to Iran?
I have traveled to Iran many times. It’s been a few years and when things settle down a bit, I’d love to go again.

What’s next?
Probably another movie. And this time, this time there will be a few Persian leads in the cast. That’s all I can say about it for now!