"Flying over Iran, I had been struck by the thought that Persia's natural and cultural landscape was predestined to be viewed from the air." 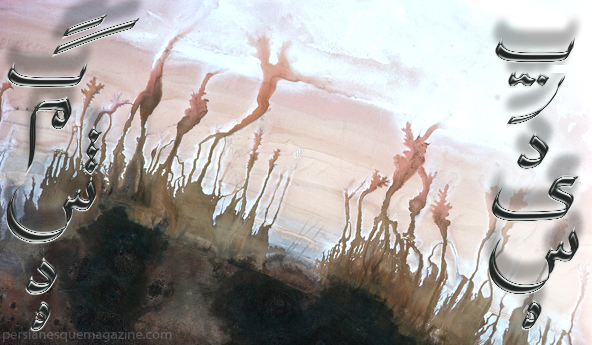 "On the Shore", Maharlu Lake Aerial Photo by: Georg Gerster (Circa 19070s)

Pioneer of aerial photography, Georg Gerster, reveals Iran as never seen before, in his exhibition of 1970s pictures entitled: “Paradise Lost: Persia from Above” at the Wilmotte Gallery from April 8 – May 20, 2011.

In the immediate years before the Iranian revolution, the Swiss photographer was commissioned by the former queen of Iran, Farah Pahlavi, to record the country’s topography.

Gerster writes “Flying over Iran, I had been struck by the thought that Persia’s natural and cultural landscape was predestined to be viewed from the air.”

The photographer, who spent over 300 flying hours crouched at the back of a twin-engine aircraft, tells us in an interview: “My position for taking photos was half sitting and half lying down In the tail end of the aircraft over a vortex where the cargo chute would normally be. It was terrifying.”

Further commenting: “[Iran’s] settlements are perfect examples of architecture without an architecture. Traces of Iran’s ancient civilization–millennial old ruins of aqueducts, citadels and ziifurats (temples)–stand in the dramatic landscape, a testament to the country’s fascinating cultural history.”

The best part of this particular project for Gerster?

“Experiencing some of the most beautiful spectacles this earth has to offer.” he says, calling the overall experience: “overwhelming and life-changing.”

The artist, remembering one of his favorite destinations to shoot in Iran, says: “Flying over Azarbaijan, in spring…It had produced an explosion of green slopes and I was moved to tears.”

Gerster, who says he was “taken aback by how green Iran was,” explains: “[It was] something that I have never in my wildest dreams expected, this surprised me the most. Perhaps I had expected nothing but salt encrusted deserts despite my  knowledge that the Iranians from times immemorial were masters of irrigation.”

Adoringly, the master photographer recalls the “sheer diversity of [Iran’s] landscapes” as a cherished part of his journey. Noting that even though Iran is “one of the oldest civilizations on Earth, many of these had remained unexplored and unspoiled.”

Having learned a few “basic” words throughout his trip, like, “hello, thank you, food, drink, and toilet”, the Zurich University Doctoral degree recipient quips that he’s “mostly all forgotten these today”.

“I remember having the dish, Khoresh Fesenjan with traditional Persian Rice, for  a celebration in 1978, it has stayed with me ever since.”

And like most who travel to Iran, Gerster says his affection for Iranians comes from “their warmth and hospitality, which has not changed over the years. The Empress Farrah was the finest example of this.”

Unfortunately, the upheaval of revolution brought Gerster’s study to a sudden halt and a planned book of the project was not published until some 30 years later, when Empress Farah Pahlavi and Iranian-born writer Maryam Sachs rediscovered the images during a visit to the Arts Museum Bochum in Germany.

Overwhelmed to see these spectacular aerial views of her homeland, Sachs was determined to bring the photographs to fruition herself.  The book Paradise Lost: Persia from Above was published in 2009, where Sachs calls the images “a gift to all Persians, revelations of the past and works of beauty in themselves”.

Georg Gerster was born in Winterthur, Switzerland in 1928. Since 1956 he has been a freelance journalist and has worked on a regular basis for the Neue Zurcher Zeitung and the National Geographic University.