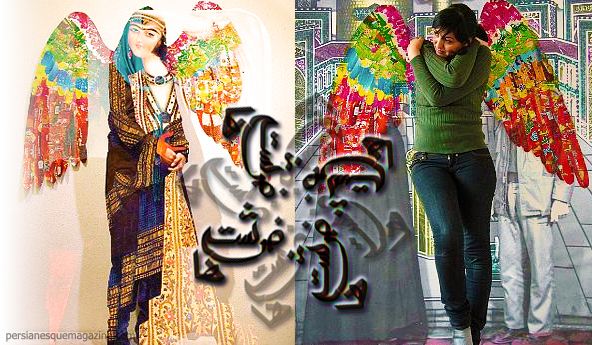 Both Paintings from the Angel series by Hojat Amani, 2010--Inkjet Print on Canvas

Angels and other supernatural heavenly beings appear in all major world religions, uniting believers across the globe, protecting and guiding man; angelic creatures have been depicted by artists since Mesopotamian times.

And now London-based gallery, Janet Rady Fine Art’s (JRFA) latest exhibition, entitled Concerning Angels, features the work of nine aritsts from across the Middle East, each presenting their own very personal interpretation of what Angels mean to them.

This group show will include works by Iranian artist: Afsoon, Hojat Amani, Fereydoun Ave, Neda Dana-Haeri, Malekeh Nayiny, Mehri Honarbin Holliday, and Bahman Jalali.
Many of the featured artists will be present at the opening. “We are particularly proud to welcome Hojat Amani who has come from Luristan in Iran, especially for the exhibition.” JRFA says.
On view, will also be his short video on how to become an Angel.