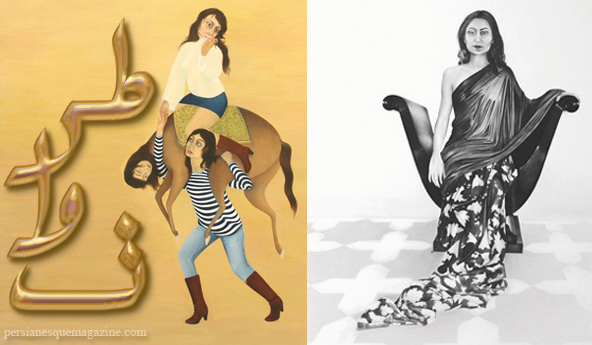 She had us at first glance!

San Francisco-based Iranian-American artist, Taravat Talepasand, has the ability to create the kind of art that makes you incapable of passing by her pieces without feeling the need to stop and stare–trying to figure out what she’s trying to tell you.

Her aesthetic is not only provocative and sexy…It’s smart!

Selected to show at the 2010 California Biennial and receiving the Richard C. Diebenkorn Fellowship, Talepasand’s work feels researched and conceptual at times, but not in an overbearing way; it intrigues enough but leaves you hungry for more–whilst giving you something to ponder.

As she tells us, Talepasand’s work “deals with the duality of cultural identifications between Iran and the United States, East vs. West.”

On her last trip to Iran, she had a few revelations: “I became more acutely aware of the cultural mores governing what would be deemed ‘inappropriate,’ an accessible state-of-being within any culture. Growing up an Iranian within America had been arduous and awkward,” says Talepasand.

“As a whole, we, as Iranians, had little consciousness of assimilation because of a constant denial of our permanence in America,” She says. “Being a young woman born into the new name of the Islamic Republic of Iran involves a certain degree of uncertainty over one’s identity. In Iran I found myself to be transgressive, yet within American culture being Iranian is transgressive in that American individualism and Iranian deference to tradition were irreconcilable and traveling down one of those paths meant turning your back on the other even if the defiance was temporal; this was the hidden catch of the formation of my identity. The contradictions caused my head to constantly bounce around the questions of percentages; identity which is inherently exterior and self-defined versus inward and pre-determined. Was it like a game of backgammon? Sixty percent luck, forty percent skill….“

The sometimes-controversial artist’s fascination with “popular culture and its accessibility to modern day Iran” has lead to her creating art that–in her words–is about “lived experience and how to claim that experience.”

And while she continues to focus on “cultural taboos identified by distinctly different social groups, particularly those of gender, race and socioeconomic position,” Talepasand tells us that her work “reflects the cross-pollination, or lack thereof, in our ‘modern’ society.”

Taravat’s distinct style which “draws on realism and renaissance painting,” highlights “acceptable beauty and its relationship with art history under the guise of traditional Persian miniature painting.”

“I am aware that I am indulging in an anachronistic practice which is labor intensive and, perhaps, limited in the scope of its impact–my interest, however, is in painting a present which is of–and is–intrinsically linked to the past.”