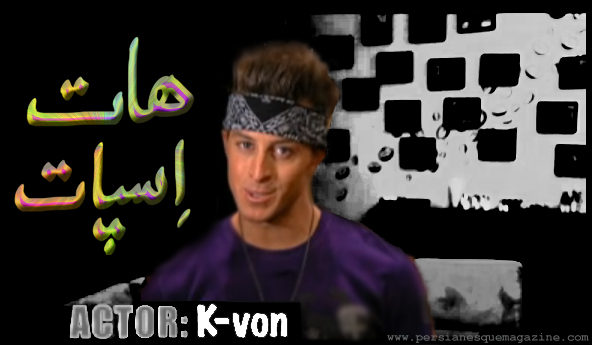 K-von as a "juicehead" on MTV's Disaster Date--Original Photo: MTV

And if you’ve seen at least one of the show’s episodes featuring K-von, like us, you’re wondering how he keeps his act going for so long without making himself laugh…

“A lot of people only know me as a comedian, but I’ve spent years studying the art of acting.” K-von tells us. “It’s funny because ‘playing make believe’ comes so natural to most of us as kids.  A kid never gets embarrassed or laughs at themselves when pretending to be the captain of a spaceship on a playground.  Then somewhere down the line we all ‘grow up’ and get nervous and self conscious about all these things which causes us to laugh and blush.  Acting class is where adults come together to pretend and make believe and half the time we are just working so hard to learn how to become that naive kid again.  When you are fully invested in your character or your situation you won’t laugh as much because you are thinking like the character not the spectator.  Being fully invested in your character also results in an out of body experience.  I can’t tell you how many times when it’s all over I watch the clips and laugh thinking, ‘Wow, I said and did that?!'”

Where does the Iranian hottie get inspiration for the characters he plays so well?

“We meet once a week and come up with new ideas for characters and new situations we can build a funny ‘date’ around.” Says K-von of his process. “Personally, I would try to submit a handful of ideas every few weeks and a number of them made it on the show which was very rewarding.  However we also utilized the help of a great staff of writers that have been involved in movies and other large Hollywood projects, so a lot of planning went into making these dates look effortless.”

Maybe he’ll host the “After Show” show for Jersey Shore’s upcoming season as The Hot Spot?

“I don’t think they will let me since I am Persian.  The Italians don’t want our people stealing all their thunder and it wouldn’t be hard at all.  Put a couple of good looking Persian girls on TV and America would forget all about ‘Shnookie’ which I think is Italian for gerbil.”

Outside of…Well…The part about Persians “stealing all their thunder,”–(we come fully charged with dangerously high-wattage electricity)–half of the current cast members of The Jersey Shore aren’t technically Italian either–including…Shnookie. So we don’t see why they wouldn’t choose K-von’s pseudo-guido to host the gab-fest post-show. (Of course we say this wearing our heavily Perr-zhie-tinted lenses.)

Next post Comedy Show: Max Amini and Friends Coming Back to DC!