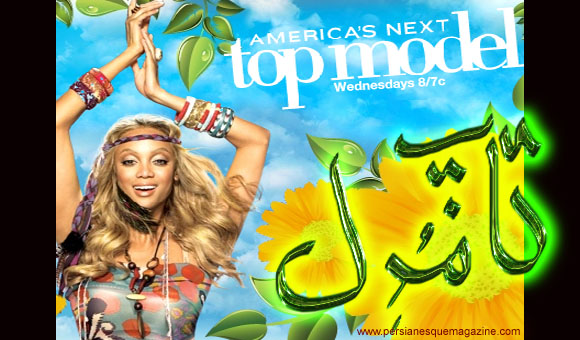 Having worked with an almost never-ending list of Hollywood celebrities, master-photographer Firooz Zahedi made a cameo last night on  Tyra Banks’ model-grooming show: America’s Next Top Model (ANTM). The girls’ directive for the episode was not just to strike a pose, but to smeyes (smiling with your eyes) on the racetrack with their shot-props: a horse and jockey.

“Softer, softer. Lighten up.” The seasoned Zahedi told 22-year-old contestant Courtney who was given the boot by the judges (which also included The Hills’ Lauren Conrad).

Zahedi is the second Iranian since Sara Racey-Tabrizi from cycle 2, to  appear on the highly-successful-amongst-its-demographic show on The CW network.

Not only is Zahedi to credit for music album covers for musicians like: Barbra Streisand, Bette Midler, Shakira, Diana Ross, Charlotte Church, Barry Manilow, Natalie Cole, Placido Domingo, and Sarah Brightman but his resume is overflowing with the world’s most elite actors, actresses, models, and beyond.

Back in 2006 Zahedi was romantically linked to Elizabeth Taylor. (Yes, you read that correctly.)

To which Taylor–who described Zahedi as as “old and dear friend”–then responded, “We are not, have never been, and will never be romantically involved.”

Taylor was probably telling the truth since Zahedi is easily one of the most handsome older professional photographers around.

Previous post The Power of Interview: Christiane Amanpour Launches Own Show on CNN