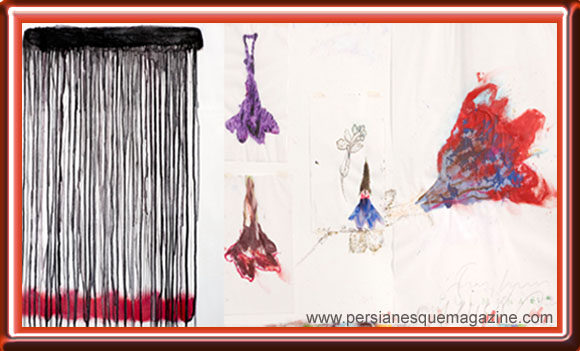 Sistani Gallery is pleased to present the second in its series of exhibitions featuring contemporary Iranian Artists.  On first examination, the works of Neda Dana-Haeri and Fereydoun Ave appear to be compositionally very different.  However what draws the artists together is their deep spiritual understanding and the sensitivity of their work.  Both are influenced by their Persian heritage and culture and both have found their own individual way of reinterpreting this in a totally contemporaneous manner.

NEDA DANA – HAERI
Neda Dana-Haeri’s art is inspired by Persian Sufism particularly by the works of Attar, Molavi (Rumi), and Hafez.  The series Aghl-e Sorkh, Crimson Mind, is influenced by Sohrevardi’s philosophy of Eshragh (Illumination) where light and colour are a continuum of the manifestation of physical and metaphysical “bodies” (Hayakel-e norieh). Here, vision and awareness transcend their linear limitations to reach an abstract world subtly imbued with dissolving and emanating colour.

Deploying a deceptively simple palette, dominant black strokes combined with striking red lines, harmoniously balance utterances of a pure white light piercing through the lines.  Traveling through unconscious depths, this reflected light, at once unassuming and yet pervasive, wakes up dark corners to unexpected movement, manifesting a sudden consciousness to unfold this hidden mystic world.

Neda left Iran in 1977, studied psychology and fine art and has been living and working in London ever since. Her recent exhibitions include Within and Without (2007), No Unifying Demographics (2008) and More Better (2008).  Neda has curated a number of exhibitions; most recently as co-curator of In a Different Light at Osborne Samuel Gallery 2009.  She is featured in Contemporary Art in the Middle East published by Black Dog Publishing (2009).

FEREYDOUN AVE
Fereydoun Ave, best known for his acclaimed Rostam (the pre-Islamic Iranian hero) works, presents for the first time in London a comprehensive selection of his recent meditative flower series, including his ‘lal dahlias’ (created in memory of his late mother) and pulmonarias’.  In addition, the exhibition includes examples of his ongoing ‘four sacred elements’ collages. Executed in watercolour, mixed media on paper and canvas, and recalling the work of his friend and mentor, Cy Twombly, the present creations are refined and delicate and exude an air of elegance and calm.   A life spent between Europe, America , and Iran has informed the formal and theoretical basis for Ave’s art. Fereydoun Ave was born in Tehran in 1945 and completed his primary and secondary education in England .

With a career grounded in the theatre and film world, he gained a BA in Theatre Arts from Arizona State University in 1969 and studied film at New York University in 1969-70.  Prior to the Iranian Revolution, he worked as a stage and graphic designer at the Iran American Society, Tehran ; was Resident designer for the National Theatre, Tehran , and advisor to the National Iranian Television and the Shiraz Arts Festival.  In 1974-79 he was acting artistic director of the Zand Gallery in Tehran and after the Revolution in the 1980s, he opened his own gallery space, Ave Gallery in North Tehran .  Ave’s work is represented in various collections in the USA including the Cy Twombly Foundation; the Contemporary Art Museum, Tehran; Centre Georges Pompidou, Paris; and Lloyds Bank, Geneva.