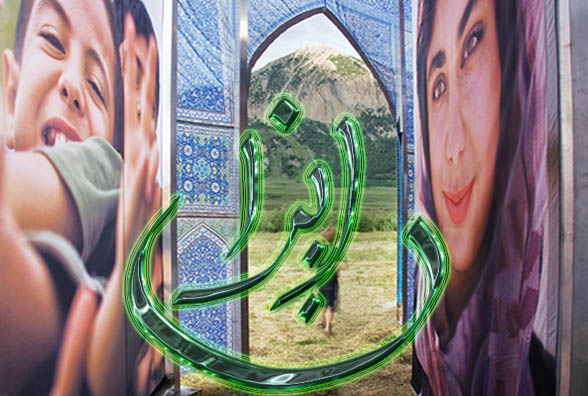 WASHINGTON, DC – As a hardcore Iranian (whatever that means) and connoisseur of all art forms, we tend to think that some Americans don’t necessarily love “eye-ran” because, well, we live in the US and read the “news” here too — and have been aware of all the negative point-of-views and dehumanizing media descriptions of our people and country – but as we knowingly spew the wrong in an attempt to defend Iran, we’re quickly righted by yet another amazing artist that manages to bridge the pseudo-facts that decorate the newspapers (and our dinner-party conversations) with the beauty of human life… as it is in Iran, and has brought us back to: love.

Meet Tom Loughlin, a philanthro-artist whose eh-sauce (emotion)-inducing multimedia installation: Pictures of You – Images from Iran  features “portraits and photographs showing Iranians in everyday life,” and opens the conversation door to differing thoughts and beliefs (or misbeliefs) pestering between Iranians and Americans for the past thirthy years. Artistic expression has long been a way to depict political undercurrents, and Tom has managed to bring light to a dark situation, and culturally enlighten others (say in the Midwest) by using his photographs and recreating his insight on sheer sheets of fabric; helping others experience Iran in a unique way. His work can only be described as relevant-yet-modern and penetratingly influential.

Enjoy our interview with an American whose tasty travels through Iran touched him enough to inspire him to express his appreciation for Iran and Iranians, on an enchantingly visionary platform.

SKS: What was the inspiration for this project?
TL:  The roots of this project go back a long way, but the immediate inspiration was the kindness and hospitality I encountered traveling through Iran in 2006, and my wish that every American could have a chance to travel to Iran to see it for themselves.

What audience is this project intended for?
We hope to show the installation to people from all walks of life in the United States.  The show just doesn’t work if it’s cloistered in art galleries or museums.  It needs to be out on the American landscape and open to the public, and we need to document how Americans respond to it.  The documentation is critically important, because ultimately we want to invite people in Iran and around the world to look at how this show was received in by Americans, and to think about what that means about the United States.

Were you able to obtain a visa for travel to Iran easily?
There’s a formal process that must be followed, but so far I’ve applied for three visas and received them all.

What was your impression of Iran, the country?
I could write a book in response to this question!  One thing that really struck me is the way each region’s architecture and culture resonated with the landscape, such as the ingenious use of water, wind, and shade in Yazd.  It’s fascinating to travel around a country where you can witness the results of 3000 years of human creativity.

What was your impression of the people of Iran?
I guess this would be volume two of my book.  My overall impression was that Iranians and Americans have an enormous amount in common.  I was also struck by how relevant poetry is in Iran.  I happen to believe that Rumi, Hafez and Saadi have a lot to say which is deeply relevant to modern life in the United States as well.

What places/cities did you get to travel to while you were in Iran?
Not nearly as many as I would have liked, but I was able to visit Tehran, Yazd, Shiraz, Isfahan, Kerman, Natanz, and Shomal.

What has your general audience response been?
Overwhelmingly positive.  Everyone has strong opinions, and a few of them are quite negative.  About five percent of our visitors want to explain in great detail why they think I’m horribly misguided.  Just about everyone else seems to leave with a strong sense of the humanity of Iranians and the beauty of Persian culture.  They may have different ideas about what the right foreign policy should be, but they agree that it should be rooted in compassion. 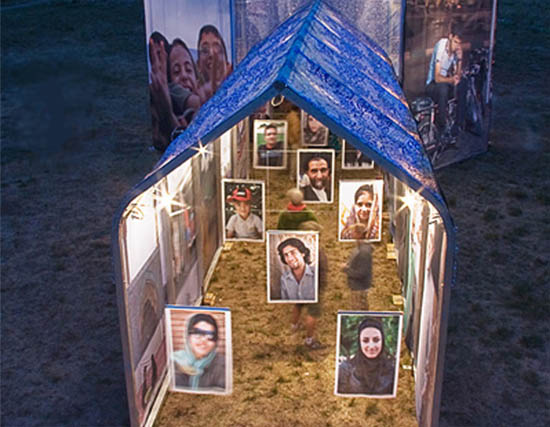 How many places has your installation been showcased?
So far we haveshownit in two locations: Denver, Colorado (during the Democratic National Convention) and Crested Butte, Colorado, the small town in the Rocky Mountains where I live.  We’re hoping to go to Los Angeles next, and a whole host of venues after that, but it is all contingent on fundraising.

Did you make any friends while you were in Iran?
Dozens!  There was one group I got to be particularly close with in Tehran, and I miss them greatly.  On one of my last nights in Tehran in 2008, I told my friend Mohammed about how much I appreciated the warmth with which he had welcomed me, and how much I admired the depth of his love for his friends.  He observed that friendships in Iran may be stronger than friendships anywhere else in the world, and I think he’s right.

What would you say to Americans that support a military-strike against Iran?
I would echo what my friend Mansour said to me: Behesht-e Zahra is full of peace-loving young men who may not have agreed with everything their government did, but who fought to the death to protect their beloved homeland.  I might also throw in a little Saadi:
Your body is strong and you have powerful forces
But do not take them into the opponent’s territory
Because he will take refuge in a high fortress
And a guiltless country will suffer the consequences.

What do you hope to get across to people with your pictures?
I want them to understand that Iran is a nation made up of human beings who laugh, cry, try to be the best people they can be, and love life.  Dehumanizing the people of another country not only leads to misguided foreign policy decisions, but is also contrary to the tenets of every religion I am aware of.  Conversely, I take it as an article of faith that if the American people know in their hearts that Iranians are human beings, our democratic process will infuse that compassion and wisdom into the actions of our government.

From your personal point of view, do you believe that the media-created image of Iran and Iranians is correct?
How could it be?  I was in Iran shortly after the movie 300 was released.  I found myself being asked repeatedly why Persians were so demonized in the film.  The more I tried to describe American audiences’ hunger for narratives with a good guy defeating a bad guy, the more deeply I understood Iranian’s concerns.

How long did it take you to get your whole installation together?
The photography and audio recording required three trips to Iran.  The creation of the physical structure took about eight months from conception to completion, and depended on the help of a large group that included architects, engineers, custom metal fabricators, the world’s finest commercial print shop, and a whole bunch of people with sewing machines.

How were you able to fund such a costly piece of multi-dimensional art?
My wife and I have poured a considerable amount of our life savings into the project.  We believed that it needed to happen, and we understood that it would be easier to fundraise once people saw what we had built.  Can you imagine the looks I got when I tried to describe this idea to people?

What was your favorite thing about Iran, the country?
The people who live there.

What’s a favorite story you can share about your time in Iran?
On my first night in Shiraz during my first trip to Iran, I persuaded some of my American fellow travelers to wander out of our hotel in search of a billiard hall we had heard about.  This was definitely NOT on the government-approved itinerary, and we weren’t quite sure what we were getting ourselves into.  We ended up spending the evening playing pool with a group of young Iranian men.  There were no tense standoffs, no cultural misunderstandings, no secret police bursting through the door—just young men playing together and enjoying a few laughs.  I’ve forged much deeper connections since then, and the idea that Iranians and Americans can be friends is familiar to me now, but at the time it felt as though we were standing on the moon playing foosball with E.T.

Did you learn any Farsi on your trip?
Bale, amma Farsi khub balad nistam.

Favorite Persian food? If any.
Anything home-cooked and/or involving pomegranate.  If I had to pick one thing, I would say khoresh fesenjun.  Definitely not doogh.

What do you hope happens to the future of US-Iran Relations?
In the immortal words of Hafez:
Why just ask the donkey in me
To speak to the donkey in you,
When I have so many other beautiful animals
And brilliant colored birds inside
That are all longing to say something wonderful
And exciting to your heart?
Let’s turn loose our golden falcons
So that they can meet in the sky
Where our spirits belong.