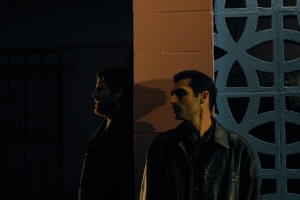 You asked for it. And you got it. We got you an exclusive Q&A with Iranian-American Actor: David Ackert. Busy as ever, David takes a moment to give us an inside look into his life and box of projects.

What is your full name?
Ramin Stephen Ackert

Your grandfather was the legendary Iranian composer Ruhollah Khaleghi, did he influence you in any way that you can share with us?
He died before I was born, but his presence was always very powerful in the family. His memory was honored by my grandmother, and especially my mother. She and my father are also musicians, so I grew up with an artistic legacy in a household that supported creative vocations. As a boy, when I told my mother I wanted to be an actor, she was thrilled. When my little brother told her he wanted to be an electrical engineer, she said, “can’t you do something a little more artistic?”

At what age did you first get into acting?
I first decided I wanted to be an actor at the age of 11. I had just switched elementary schools in Virginia in ‘79. Being the new kid in my sixth-grade class, my teacher introduced me as the “new Iranian student who just came over from where the hostages were, and might be able to answer any questions…” Some of the other students saw me as a scapegoat from that moment on. There was teasing and fighting. I quickly came to perceive school as a life-threatening place. One day I decided to play sick – I told my mother I had terrible stomach pain. After a couple of days, she took me to the doctor, who diagnosed me with appendicitis. But the “pains” kept getting worse. Eventually I ended up in the hospital – far, far away from school. I had managed to conjure up an acting performance that fooled even the most sophisticated of doctors.
Later that I realized that my lies had caused my parents a financial burden, so I promised myself never to do something like that again, but I knew that when I grew up, I would be an actor – someone whose job it is to pretend circumstances convincingly.

Have you had any classical training?
Yes, I studied at the Folger Theater in DC before it became the Washington Shakespeare Theatreand trained at Carnegie Mellon University’s BFA conservatory program as well as Ithaca College’s drama school. Even now, I still take acting classes. I find there is always something more to learn. Ironically, it is often the same lessons I thought I had learned before, now relearned.

What’s something your fans would be surprised to know about you?
I’m getting a masters degree in Spiritual Psychology. That’s pretty unusual.

Who is your biggest inspiration?
It changes every day – I’m most inspired by the things people do in the moment. Sometimes it’s the stranger on the street who bothered to give me a genuine smile. Sometimes it’s a friend’s thoughtfulness, my wife’s courage, my brother’s generosity, my father’s faith or my mother’s kindness. Sometimes it’s my own persistence. Whenever I feel I am disciplined or focused, I become inspired to be more so.

What is La Linea?
“La Linea” is a feature film that is due to be released later this year. It’s a story about rival drug cartels in Tijuana and stars Andy Garcia, Ray Liottaand a bunch of other very macho guys. I play an Afghani farmer who tries to maintain his dignity as he sells poppy to drug lords.

What did you like about the character?
I like how the character struggles with his own integrity. He knows he’s compromising his ethics in order to make his fortune. He finds little ways to recover his dignity, but in the end, they are only cosmetic gestures. He has sold out and he knows it. It is the classic tension between a short term gain and the long term impact on one’s integrity. I am often tempted by whims (usually breaking a promise to myself) and whenever I succumb I know it’s eroding my self-esteem. And I always feel a kind of victory when I choose the high road.

What was it like to shoot the film?
Action movies are always more intense on set. Guns. Bullets. Shouting. People are amped up. Egos are part of the story being told. So in some ways it’s more exciting. But oftentimes I am less at ease when shooting something like this as opposed to a courtroom drama or a comedy.

Describe life as an Iranian-American actor.
There is a small community of working Iranian-American actors in my age range, and I feel that a bond has developed between us over the years. We all go out for the same parts and see each other at the auditions. Earlier this month I was at an audition for “House” and ran into Anthony Azizi, Maz Jobrani, Navid Negahban, and a bunch of other familiar faces. We were all competing for the same role, but there was a wonderful camaraderie between us all. I didn’t get the part. But with that group of talent, I know that whoever did get it will deliver a hell of a performance.

Word is that you’re working on a pilot, can you tell us a little about it?
I’m writing and producing “Unfinished Life,” a web series that will be released later this year. In it, I play a con man who has to atone for the people he’s hurt along the way. Similar to my character in La Linea, this is a man who is working hard to do the right thing in spite of his flawed nature. I am drawn to characters like that – they reflect the way I often experience my own life.

How can your fans stay updated on your pursuits?
www.davidackert.com.