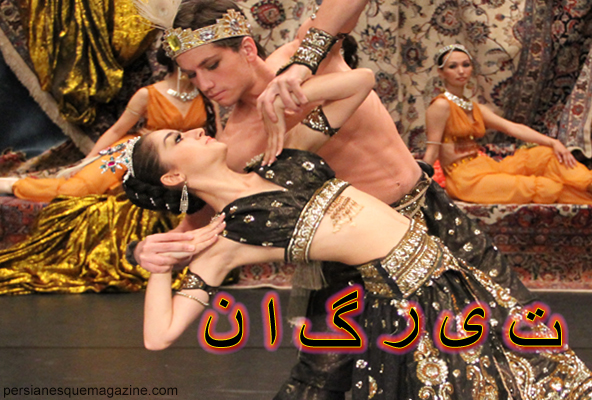 Tirgan 2015 which runs from August 20-23rd in Toronto, Canada, continues the cultural dialogue between the Iranian community and the global community-at-large with new and returning artists. This year’s festival also includes Scarlet Stone, a new multidisciplinary and collaborative effort combining music, dance, and animation.

The festival will open with a performance by singer and multi‐instrumentalist Hamed Nikpay and Ensemble featuring flamenco dancer Karine Gonzalez on Thursday August 20.

See  highlights  below  with  both  ticketed  and  free  events,  or visit the Tirgan website to view the full  program.

For those who are interested in expanding their culinary skills, Iranian-American chef and author of Pomegranates & Roses, Ariana Bundy, will show how to cut corners while sharing some ofher top recipes in the cooking demonstration: Recipes from Persia.

More than the dancers in the play, Scarlet Stone, visitors can enjoy the dance performances

and choreographed by Nima Kiann.The four dance sequences each represent a

different genre of choreography with classical and contemporary ballet as well

as a blend of folkloric dances of Azerbaijan and Lorestan.

Abbas Kiorastami, A Report (in Persian with Eng. subtitles) by director Bahman Maghsoudlou,

a documentary not to be missed as it features cinema historians and critics explaining the particularities and importance of Kiorastami’s movies.

In the cinema schedule, there is also a preview and panel discussion of the work in progress,

With a lead character voiced by Sandra Oh, the film uses the medium of poetry to explore ideas of cross‐cultural exchange in this coming-­of‐age story. Rosie Ming, a youngCanadian poet of mixed descent, is invited to perform at a Poetry Festival in Shiraz, Iran, while she’d rather be in Paris. Other titles in the feature lineup are: One.Two.One; Exilic Trilogy; Melbourne; From Tehran toLondon and Stop-Over with most of them being accompanied with a Q&A. All screenings are free.

Witness performances by, amongst others, Kayhan Kalhor (Iran) on spike fiddle and Erdal Erzincan (Turkey) on lute, whose purely instrumental and modern composition is a deviation from the traditional ancient modal system known as maqam. Singer Darya Dadvar and Ensemble’s performance will reflect and unify different cultures, historical periods, languages, and dialects. Raghs (Persian: dance), is a performance that promises to make everyone do exactly that, where Shanbehzadeh Ensemble featuring DJ Michael Red will create a unique encounter between electronic music and traditional music of southern Iran. If pop-­rock with a touch of jazz is more to your liking, then come and listen to Iranian‐Canadian duo Babak Amini & Houman Javid.

Talks over the weekend allows visitors to learn more about Iranian literature and culture. In the lecture scheduled for Saturday August 22nd, The  Pleasures  and Problems of  Translating Iraj Pezeshkzad’s Daii Jan Napelon into English presented byProfessor emeritus of Persian at Ohio State University, Dick Davis, promises to give insight into one of the most important and well­‐loved works of Iranian fiction, Daii Jan Napelon (Persian: My Uncle Napoleon) by Iraj Pezeshkzad.

In the Lion’s Shadow ‐ The Iranian Schindler and His Homeland in the Second World War, is a talk and book presentation also on Saturday August 22 by author Dr. Fariborz Mokhtari about an Iranian diplomat in Paris during WWII, who used his diplomatic influence, legal skills and creative wit, to save hundreds of Jewish families during the German occupation of France.

Next post Art Exhibit at Saatchi Gallery: "This is Tomorrow" Featuring Farhad Gavzan