Although he left his home in Iran over 40 years ago to settle in France, Chahab continues to explore Iran’s rich history, cultural heritage, and famous excavation sites for inspiration: His work is set to be featured at the Golestan Gallery in Tehran (Iran’s most prominent contemporary art gallery) in the coming months. 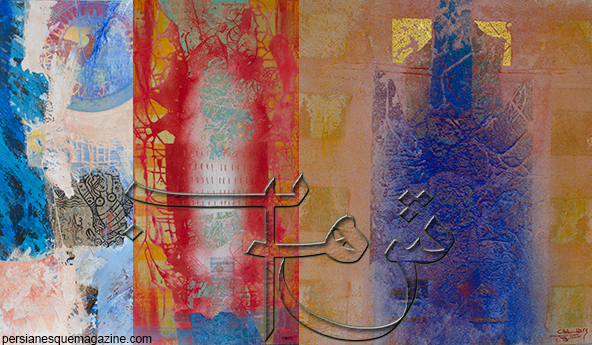 Born in Iran, and educated in Holland and France where he graduated with honors in Fine Arts from Ecole des Beaux-Arts de Marseille, contemporary artist Chahab Tayefeh-Mohajer’s first solo exhibit, “Ancient Meets Contemporary”, will be on view at Tara Gallery  in Santa Monica, CA, through January 14, 2015.

“I’m an artist because it is my spiritual need and livelihood. To thrive, I must remain in a perpetual movement of creation,” says Chahab whose work has been exhibited all over Europe and the Middle East.

The city of Jiroft, an archeological haven located in the southeastern province of Kerman, Iran, has especially been a source of fuel for Chahab’s vivid and emotional imagination.

Although he left his home in Iran over 40 years ago to settle in France, Chahab continues to explore Iran’s rich history, cultural heritage, and famous excavation sites for inspiration: His work is set to be featured at the Golestan Gallery in Tehran (Iran’s most prominent contemporary art gallery) in the coming months.

Chahab’s unique technique of working with pigment, mineral, and acrylic has lent his art a refreshing intricacy that reflects the primal form of expression found in antiquities yet is wholly modern, abstract and immeasurable.

“I think people will enjoy the warmth of colors and the meanings of the forms and the connections to the rich poetic and cultural foundations of Iran and its people…Being surrounded and exposed to the rich colors and being surrounded by the unusual combinations of form and meanings I think will be particularly attractive to people,” says Tara Gallery owner Homa Taraji.

Enjoy our exclusive brief Q & A with the Iranian artist whose book, “Ancient Meets Contemporary” (a coffee table book riddled with Chahab’s contemporary masterpieces), is available for purchase at Tara Gallery, below:

PM: Who were your artistic idols as a child? (Any particular artist(s) that inspired your later work?)

CTM: I always collected art books from different schools of art; impressionism, African art, ancient art… everything. My artistic idols were Max Ernst and Paul Klee, who was just very imaginative. He had varied styles and methods and he would mix various colors on canvas, and from those, one finds objects and landscapes. I was also influenced by Iranian artists, Bahman Borojeni, Gholamhossein Nami.

How does your Iranian background influence your work?
When I was in Iran, I was influenced by foreign and Western artists; when I left Iran, I was hit by a certain kind of nostalgia and I was influenced by the memories of my childhood, my culture, my home. When I arrived in France, and the School of Fine Arts in Nice, I started using Persian calligraphy in my art. I used it as form, not language–it was without meaning. I changed the rules of using calligraphy in art.
When I then studied ceramics, I spent a lot of time considering cave paintings. I wanted to see what were the first human instances of art and design. The forms of my ceramic pieces became similar to what one finds in the archaeological record and the sense of writing has always been in my work–writing without language becomes universal.
What do you want your audience to experience when viewing your work(s)?
Making art is cathartic for me because there is light and colors and happiness. It’s transcendental. But for the audience? Sometimes, there is a person who will look at my work and they will see me, get my mind. Someone else might remain a stranger. What they experience, it’s up to them.
Do you feel, as an international artist, that certain countries are more/less drawn to your style?
I am deeply influenced by my culture, but I’m not sure if Iranian people necessarily understand what I’m doing more than someone from another country might. I’ve had many exhibitions in Sweden, France, Germany, and Italy: I feel those people really understood what I was trying to say and to me, that is success. I am a foreigner, but I got “in”…When one gets in, that means they understand you.
Do you think it’s important for Iranians to support Iranian artists?
It is extremely important. Art and artists need to always be promoted so that they can grow and so they can go further. It’s an obligation for anyone who is present to help and support the progress of art.
Favorite Iranian artist(s)?
Favorite Iranian artists include Sadegh Barirani, Nima Yushij, and of course, Sohrab Sepehri (both his poetry and his paintings). I love any artist who is influenced by the philosophies of Iranian poets like Hafez and especially Rumi.
For more information on Chahab’s Tayefeh-Mohajer’s exhibit “Ancient Meets Contemporary”, please visit: TaraGallery.org.