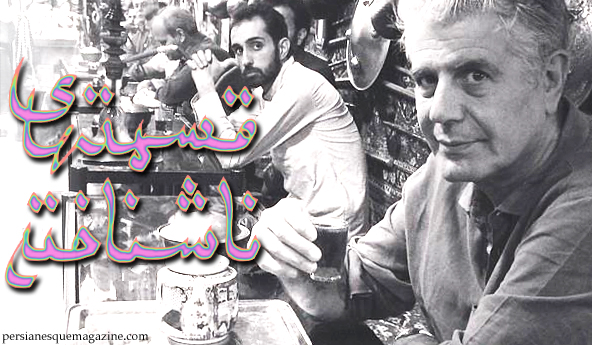 All you Iran-loving foodies, your wish has come true.

“It took many years of trying, but we finally received approval from the government, and I flew to Tehran with my crew of four in June [2014]. While there are certainly restrictions to shooting a TV show in Iran, the country was exactly as we’d heard from the few who’d actually been there: ridiculously, outgoingly friendly.The officials I met while filming there were welcoming, even enthusiastic, that a Western television crew wanted to look at their country from a more culinary and cultural point of view. The sinister-sounding ministry in charge of our approvals was congenial and actually helpful. If there was surveillance, it was unobtrusive. There were none of the clumsy attempts to shape our experience that we’ve endured in, for instance, Romania and Egypt.” Bourdain says of his experience in Iran.

Calling his time in Iran, “particularly hospitable and rewarding”, Bourdain, the first American mainstream TV host and chef to go to Iran and film such a show, goes on to describe Persian cuisine as, “spectacularly delicious and sophisticated food.”

“When people watch the episode I filmed there, they will be surprised, whatever their feelings on the politics. It will challenge their assumptions, just as my trip challenged mine,” Bourdain quips.

As we look forward to watching this episode with our Persian-critic-eyes, we can’t help but wonder if Bourdain’s friend, Andrew Zimmern will be next…

*Above Photo: Anthony Bourdain at a Chaikhaneh (Persian: Teahouse) in Iran — Credit: Facebook

Persian Cuisine: Saraban, A Cookbook for Everyone