Asia Society's must-see film series, Iranian New Wave 1960s-1970s features rarely screened films of an extraordinary film movement that took place before the 1979 Islamic Revolution. During the cosmopolitan and yet turbulent period of the 1960s-1970s, an auteur cinema emerged and responded actively to the cultural, political, and social conditions of the time. 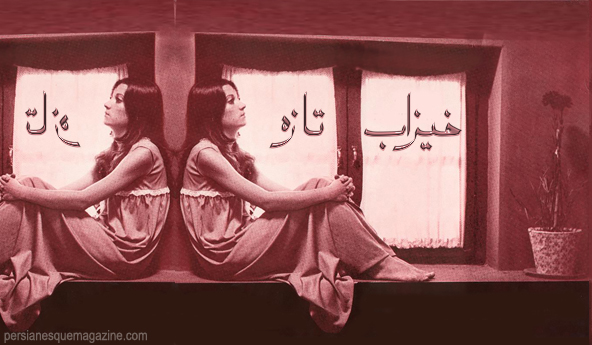 During the cosmopolitan and yet turbulent period of the 1960s-1970s, an auteur cinema emerged and responded actively to the cultural, political, and social conditions of the time.

This innovative spirit resonated with new cinematic trends sweeping across the globe at the time, from France and Czechoslovakia to Brazil and Japan. Collectively, the films present the artistic vision, humanism, and social consciousness of a generation of Iranian filmmakers.

Renowned Iranian director, Parviz Sayyad will attend post-screening Q&As, as his movie “Dead End” is included in the selection of movies featured in the series.

“While contemporary Iranian filmmakers have enjoyed international attention for more than two decades, their forebears remain little known. Iranian New Wave films have left an important legacy and laid the groundwork for later generations,” says Asia Society’s Film Curator, La Frances Hui. Due to the turmoil of the revolution, many important films of this era were destroyed, locked up, or lost. The ones deemed political became banned in Iran both before and after 1979. “It is the hope of this series to introduce American audiences to a selection of significant New Wave works and to offer a window into Iranian life during this remarkable period,” continues Hui. (A documentary film about the Iranian New Wave is included in the selection to provide analysis and context for viewers.)

This film series is organized in conjunction with the Iran Modern exhibition.

The Cow
Dariush Mehrjui. 1969. Iran. 100 min. B/W. Digibeta.
Saturday, November 2, 2013, 6:00 pm
Mash Hasan (Ezzatolah Entezami) is the owner of the only and much treasured cow in his impoverished village. One day while he is away, his beloved cow is mysteriously killed. Afraid to hurt Mash Hasan’s feelings, fellow villagers tell him the cow has run away. Distraught, Mash Hasan descends into madness and assumes the identity of the cow, as the village deals with a collective psychological breakdown. Although funded by the state, the film was banned for a year due to the unabashed depiction of poverty in the countryside—a stark contrast to the image of modernization promoted during the Shah’s reign. The film was smuggled to the 1971 Venice Film Festival where it received the Critics’ Award. While the realistic portrayal of impoverished life brings to mind Italian Neorealism, the focus on the relationship between the man and his cow—his beloved—evokes Sufi mysticism. The film is adapted from a short story by the acclaimed writer Gholamhossain Saedi.

Dariush Mehrjui (1939- ) is an icon of the glorious Iranian New Wave. With his second feature The Cow, he became the first Iranian filmmaker to receive international fame. In 1959, he left Iran to study film and philosophy at UCLA. Among his teachers was the French auteur Jean Renoir. Mehrjui has enjoyed a long and fruitful career. Some of his most famous works include The Cycle (1978) and Leila (1997).

The Lost Cinema
Jamsheed Akrami. 2007. USA. 100 min. Color & B/W. Beta SP.
Friday, November 8, 2013, 6:30 pm
Screening followed by director Q&A, moderated by Negar Mottahedeh, Associate Professor of Literature and Women’s Studies, Duke University.
This illuminating documentary examines the background and significance of the Iranian New Wave, a burgeoning film movement that took place before the 1979 Islamic Revolution. An artistic and political awakening gave birth to films that rejected uninspiring mainstream offerings and dominating foreign imports led by Hollywood. Made by Jamsheed Akrami, filmmaker/critic/scholar, the documentary sheds light on the political messages these films carry, and the reasons why many were banned pre- and post-revolution and continue to be inaccessible in Iran even today. Included are in-depth analyses of films such as The Cow (1969), Dead End (1977), and Tall Shadows of the Wind(1979), accompanied by insightful filmmaker and expert interviews.

Jamsheed Akrami is a filmmaker, critic, and Professor of Media Studies and Production at William Paterson University. As a filmmaker, he has made several documentaries about Iranian cinema: Friendly Persuasion (2000) deals with Iranian cinema after the 1979 revolution, A Walk with Kiarostami (2003) follows Iranian filmmaker Abbas Kiarostami as he captures the Irish landscape, and A Cinema of Discontent (2013) examines film censorship in Iran.

Dead End
Parviz Sayyad. 1977. Iran. 95 min. Color. HDCAM.
Saturday, November 9, 2013, 6:00 pm
Screening followed by director Q&A, moderated by Jamsheed Akrami, director of The Lost Cinema and Professor of Media Studies and Production, William Paterson University.
A young woman (Mary Apik) lives on a dead end street with her family. A mysterious man has been following her. Who is he? Is he a secret admirer or someone who is plotting harm? While the young woman draws up romantic fantasies, fear sets in as the man’s omnipresence alludes to the pervasive surveillance carried out by the secret police force, SAVAK, set up by the Shah’s regime. Due to the film’s underlying political theme and the portrayal of female subjectivity, it became banned by both regimes pre- and post-revolution. Although never shown in Iran, the film won actress Mary Apik the Best Actress Award at the Moscow Film Festival.

Parviz Sayyad (1939- ) is a highly popular director, actor, and producer in film, theater, and television, most famous for the character Samad, a country bumpkin, that he created and played in a series of television dramas and films. After moving to the US, Sayyad made the critically acclaimed The Mission (1984), which officially entered the Berlin Film Festival, the London Film Festival, and won the Jury Grand Prize at the Locarno Film Festival.

Tall Shadows of the Wind
Bahman Farmanara. 1979. Iran. 90 min. Color. 35mm.
Tuesday, November 12, 2013, 6:30 pm
Based on a short story by Houshang Golshiri, who also collaborated with director Bahman Farmanara on his breakout feature Prince Ehtejab (1974), this film centers on mysterious and chilling events that take place in a village. A group of superstitious inhabitants have erected a scarecrow for protection but soon find themselves terrorized by multiplying scarecrows. Made at the end of the Shah’s reign, the film offers a metaphorical reflection on power relations—how people create their own idols who turn around to terrorize them. The film’s alleged political message was found so dangerous that it was banned both pre- and post-revolution. It was presented to great acclaim in Cannes Film Festival’s Critics’ Week section.

Bahman Farmanara (1942- ) studied film at the University of Southern California. After returning to Iran, he joined the National Iranian Radio and Television and promoted world cinema and made short films. His second feature film, Prince Ehtejab (1974), won the Grand Prix at the International Tehran Film Festival. After Tall Shadows of the Wind was banned, Farmanara moved to Canada with his family. He began a career in film programming, distribution and production. He eventually returned to Iran and made Smell Of Camphor, Fragrance Of Jasmine (2000), his first film after two decades. The film won eight awards at the Fajr International Film Festival and the Special Jury Prize at the Montreal Film Festival.

Downpour
Bahram Beyzaie. 1972. Iran. 128 min. B/W. Digibeta.
Friday, November 15, 2013, 6:30 pm
A teacher has been transferred to a school in a poor and conservative district. He encounters the beautiful sister of a student and develops feelings for her. Although this young woman is intrigued by his attention, she is already engaged to a local butcher. In this small community where social codes are strictly followed, gossip about the two soon start to spread. Suddenly this modern intellectual finds himself under bizarre surveillance. This feature debut evokes French New Wave for its youthful impulse and Italian Neorealism for its realistic portrayal of local life. (Restored by the World Cinema Foundation at Fondazione Cineteca di Bologna/ L’Immagine Ritrovata laboratory in 2011. Funding provided by Doha Film Institute.)

Bahram Beyzaie (1938- ) is one of the most significant cultural figures in Iran. Hailed from a literary family, Beyzaie is an esteemed filmmaker, playwright, and scholar of Iranian theater. He is especially knowledgeable of the Naqqali and Ta’zieh theater forms. Other films he has made include The Stranger and the Fog (1973), Crow (1976), Death of the King(1982), and Dialogue with the Wind (1998).

A foremost figure in Iranian sociopolitical documentary, Kamran Shirdel (1939- ) studied filmmaking at the Centro Sperimentale di Cinematografia in Italy. Among his teachers were Roberto Rossellini, Michelangelo Antonioni, and Vittorio De Sica. After returning to Iran, he made many documentaries focusing on the marginalized sponsored by the Ministry of Culture and Art. But due to the revelation of the dark side of society at a time of seeming economic progress, Shirdel was expelled and exiled. Women’s Quarter and Tehran is the Capital of Iran had to be completed years later since materials were confiscated during production. Shirdel is the founder and director of the Kish International Documentary Film Festival.

Women’s Prison
1965. Iran. 11 min. B/W. DVCAM.
In this Tehran jail, over two hundred women and girls are housed, convicted of crimes such as murder and drug addiction. Beyond depiction of peaceful literature and handicraft classes are desperate personal stories of women held behind bars.
Women’s Quarter
1966-1980. Iran. 18 min. B/W. DVCAM.
Shot in the red-light district of Tehran, this film portrays the bleak existence of prostitutes. A text recited in a classroom about the progress the country has made is juxtaposed with candid interviews with prostitutes, who tell their stories of capture, escape, poverty, and daily struggles.
Tehran is the Capital of Iran
1966-1980. Iran. 18 min. B/W. DVCAM.
A text glorifying the Shah’s regime is set to ironic images of a poverty-stricken district in Tehran, populated by homeless people, blood sellers, and petit criminals.
The Night It Rained
1967. Iran. 35 min. B/W. DVCAM.
A village boy near the northern city of Gorgan is hailed in the media for heroically preventing a train’s derailment. Shirdel arrives in the village and unexpectedly hears opposing accounts of what happened. By presenting the different accounts, each serving the individual subject’s self-interest, Shirdel explores the possibility of truth.

The Traveler
Abbas Kiarostami. 1974. Iran. 74 min. B/W. 35mm.
Friday, November 22, 2013, 6:30 pm
A young boy in a provincial town is a diehard soccer fan. He steals, scams, lies, and skips school in order to gather enough money for an overnight bus trip to Tehran to watch his favorite team play. At times comical, the film is infused with poignancy as the camera lingers on this tough and yet vulnerable boy with deep affection. This self-assured work is an early testament to the brilliance of director Abbas Kiarostami, who is acclaimed for his affecting portrayal of children and philosophical study of human behavior. His celebrated works include Close Up (1990), Life, and Nothing More… (1992), and Certified Copy (2010).

Abbas Kiarostami (1940- ) is one of the world’s most celebrated film directors. He studied painting at Tehran University and began his career in painting, graphics, book illustration, and making commercials. He founded the film department of the Institute for the Intellectual Development of Children and Young Adults (a.k.a. Kanoon) which produced children-themed films and became the training ground for many filmmakers.

Next post "Dare to Live / Vivere": Chatting with Sattar