Set to appear on "Chopped All Stars", a spinoff of the Food Network's popular show "Chopped", Penny is one busy Persian mom. 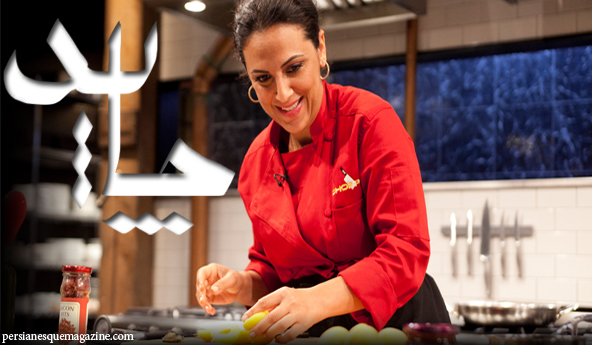 If you’ve been wondering what the stiletto-wearing Penny Davidi of Food Network Star fame has been up to, she’s got some news for you…

Set to appear on “Chopped All Stars“, a spinoff of the Food Network‘s popular show “Chopped”, Penny is one busy Persian mom.

Sixteen kitchen masters in total, are competing for creative culinary victory and $50K for their charity.

Hosted by Ted Allen, four specially selected chefs are challenged to create three masterful courses from ingredients in the mystery basket, ranging from beef tendon and crawfish, to black beans with queso fresco and chicken feet.

A rotating roster of top-notch judges will decide who gets “chopped” each week, leading up to a final showdown between the four episode winners on Sunday, May 6th at 9pm ET/PT.

Enjoy our chat with Penny who tells us she celebrated Norooz with a traditional feast of “fabulous smoked fish,” and “fresh sabzi polo (Persian: rice with greens) loaded with garlic.”

What have you been up to since your appearance on Next Food Network Star?

Well I am on Chopped All Stars, working on a line  of Mediterranean frozen foods as well as a line for QVC [called] “Penny’s Succulent Skewers”, finishing my cookbook, and talking to different production companies for my own show.

How excited are you about being on Chopped All Stars?

Beyond words…Almost as excited as when I did Next Food Network Star. [It’s] so exciting, creative, fun, and extremely challenging

Even though it’s hard, not knowing what the challenges entail ahead of time, how are you preparing for the competition?

There is no way you can prepare for this kitchen madness!

What is the one ingredient you really don’t want to have to work with?

Who do you hope will be on the judging panel for Chopped All Stars?

What do you think is the best and worst thing about being on a show like Chopped All Stars?

No advance knowledge of ingredients is the best and worst thing.

Do you still cook in stilettos?

Actually that’s all I wear in the kitchen, my stilettos and nothing else! Just ask my husband.

Will we see you cooking in stilettos on Chopped All Stars?

They wouldn’t let me, concerned I may break my neck

Next post Book Review: Pomegranates and Roses by Ariana Bundy