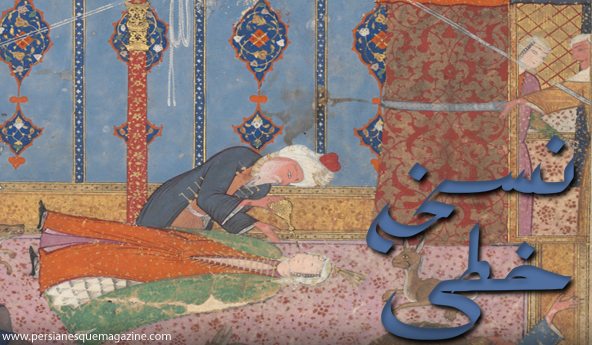 “The Khamseh will be the finest Persian manuscript in an Australian collection,” said the Library’s Director of Development, Shane Carmody.

The Khamseh manuscript was made in Astarabad, known today as Gorgan, in north-east Persia in 1509–10 by the scribe al-Abd Ibrahim. It is decorated in the Shiraz style with 15 full-page hand-painted illustrations by an unnamed artist (identified by scholars as ‘Artist B’).

“The work of this artist is found in manuscripts of the same period in the Freer Gallery of Art at the Smithsonian Institution in Washington, in the India Office Library in London, and in the Bodleian Libraries at the University of Oxford. The book comes from the high point of Shiraz-style painting and will be a significant addition to the State Library’s collection.”

The second book, the Tutinameh, is a collection of 52 moral tales told by an enterprising parrot to distract his mistress from her lover during the long absence of her husband. The story was taken from an ancient Sanskrit tale and translated into Persian around 1335 by Ziya’ al-Din Nakhshabi, a Persian physician and Sufi mystic who served at the court of a pre-Mughal Islamic ruler in India. Made in 1808–09 in northern India, it is a beautiful example of how the tradition of the handmade Persian book continued into the 19th century.

Mr. Carmody added: “Complete manuscript copies of the Tutinameh are very rare and this will be the only copy in an Australian collection. The Tutinama will be a rich addition to our collection. It shows how stories were repeated, told and retold in Persia and how the luxurious handmade illustrated book had an enduring place in the Persian tradition long after the advent of printing in the western world. I believe both books have great significance for the Iranian and Indian communities in Victoria. Their purchase will build upon the Library’s small collection of Persian manuscripts and help reflect the diversity and cultural richness of our state.”

The appeal coincides with the landmark exhibition Love and Devotion: From Persia and Beyond showing at the State Library of Victoria from 9 March to 1 July 2012. This free exhibition will bring to Melbourne over 60 beautiful examples of Persian handmade illustrated books from the collections of the Bodleian Libraries at the University of Oxford to create the largest exhibition of Persian manuscripts in Australian history.

Throughout the appeal period, which will run until July 1st, 2012, both manuscripts will be on public display in the foyer of the State Library of Victoria.

*Click here for details on how to make a tax-deductible donation online.

The five stories in the Khamsa are poetic retellings of classic tales of love and duty:

MAKHZAN AL-ASRAR (THE TREASURY OF MYSTERIES): The first is the Makhzan al-Asrar (The treasury of mysteries). This is a collection of 20 allegorical discourses about how to live a virtuous life, with some directly addressing the role and duty of a king. The poem directs the reader towards an acknowledgement of life’s spiritual destiny. Its style is more philosophical than the other stories in the Khamsa.

KHOSROW VA SHIRIN: The second story is a fabled telling of a romance between the real Sasanian king Khusrau II (r 590–627 AD) and an Armenian princess, Shirin. The story also appears in the great Persian epic the Shahnameh (Book of kings), and details the long and tortuous romance of the two lovers. The poem explores themes of constancy and faith, and in the character of Farhad (the rival to Shirin’s affections), purity of purpose. In the tale, Khosrow vanquishes Farhad and the lovers marry, but tragedy intervenes with Khosrow murdered by his son and Shirin then taking her life.

LEILI VA MAJNOON: The third story tells of the ill-starred lovers Leili and Majnoon. In this story–which has its origins in an Arabic tale and has parallels with other literature, including Romeo and Juliet–the poet Qays falls hopelessly in love with Leili, but her father won’t allow them to marry. Driven to madness he becomes known as Majnoon, meaning “possessed by spirits”, and when Leili is married to another he takes refuge in the desert amongst the beasts. Leili arranges to meet Majnoon in the desert but their reunion is thwarted when Majnoon faints at the mere sight of her. When Leili’s husband dies, the obsessed Majnoon is in self-exile in the desert. In her grief Leili dies, and is buried in her bridal dress. Hearing the news, Majnoon rushes to her grave where he dies instantly and is buried with Leili. Their tomb becomes a site of pilgrimage while in a dream sequence, they are united in paradise as king and queen.

HAFT PAYKAR (SEVEN PORTRAITS): The fourth story, Haft Paykar (Seven portraits), is a fabled telling of the life of another Sassanian king, Bahram V(r 420–438 AD). In this story Bahram Gur (pronounced: goor) is raised by a king in a foreign land, and in the royal palace, he discovers a locked room containing images of seven beautiful princesses from seven different parts of the world. Returning to Persia to claim his throne after the death of his father, Bahram Gur triumphs over his enemies and sets about winning the seven princesses. He has seven pavilions built in the seven colours of the different regions for the princesses. As he visits them in succession over the days of the week, the princesses regale Bahram Gur with stories. Their storytelling distracts him from the affairs of state and soon his kingdom is destroyed by an evil minister. Bahram Gur takes revenge and restores order, during which he converts the pleasure domes to fire temples, in the Zoroastrian manner, to please God. The story ends with Bahram Gur going on a hunt and disappearing forever, involving a pun on the word “gur” which means “wild ass” but also “tomb”.

ESKANDARNAMEH (THE BOOK OF ALEXANDER): The final story tells of the legendary exploits of Alexander the Great, or Eskandar. It consists of two books. The Sharafnameh gives an account of Alexander’s life from his birth and accession as king to his conquests and later life as a sage and prophet of monotheism. The second book is the Eghbaalnameh and relates the story of Alexander’s transformation into an ideal ruler blending the Greek philosophical ideals of Plato and the spiritual wisdom of Islamic mysticism.

The Tutinameh is a collection of 52 moral tales told by an enterprising parrot to his mistress, to distract her from meeting her lover during her husband’s long absence:

The story was translated into Persian around 1335 from a series of 70 ancient Sanskrit tales. It is a fine example of Persian literature adapting ideas and stories from surrounding cultures. The Persian redaction of 52 tales became popular in later Mughal courts from the 16th century, where elaborate illustrated copies were created by the finest artists. Very few of these copies remain intact.

In the Tutinameh, the merchant Maimun presents a parrot and a Mina bird to his wife Khojasteh, to keep her company while he is away. No sooner has he left than his wife spies a handsome man and through intermediaries arranges an illicit meeting. The next evening Khojasteh tells the mina of her plan. When the bird protests her act of disloyalty, an enraged Khojasteh kills the mina and turns to the parrot for advice. Displaying great (and comic) cunning, the parrot approves of her plan and offers to provide a false alibi for Khojasteh when Maimun returns, like the parrot in the story of Farrokh Beg. Intrigued, Khojasteh asks to hear the story of Farrokh Beg. The parrot obliges. By the time he has finished, dawn is breaking and Khojasteh’s meeting with her lover has not occurred.

This episode continues over 52 nights, with each story contriving to add a different moral to the tale and to prevent the meeting of the lovers. The stories are a wonderful collection of animal fables, lovers’ tales and adventures, exploring themes of honour and courage, deceit and treachery.

One of the stories is “The tale of the Goldsmith, the Carpenter, the Tailor and the Hermit Who Wuarreled About a Wooden Woman”. These four are traveling together and set up camp one night with each taking turns to keep watch. To stay awake on the first watch, the carpenter carves a figure of a woman. On the second watch the jeweler adorns the carving, and on the third the tailor clothes it. On the fourth watch the hermit prays to God and the statue comes to life. The four travelers quarrel over who among them should have this beautiful woman. They take their dispute to an official who, when asked to adjudicate, claims the woman as his lawful spouse. He takes the four creators to a police officer, who in turn claims the woman as his brother’s long-lost wife, and takes now five prisoners to a magistrate, who claims the woman as his own. In the hullabaloo of the argument an old man suggests they seek counsel from the Tree of Decision. Each of the seven men makes his case before the tree. When the last is heard, the tree opens; the woman enters and is taken back into the wood. A voice issues from the tree to say that everything returns to its first principles, and the seven suitors for the woman are overcome with shame.

The story of the parrot does not end happily for Khojasteh. After 52 nights Maimun returns and immediately inquires about the missing mynah. Khojasteh has no time to answer before the parrot tells of the mina’s death and Khojasteh’s attempt at adultery. Maimun beheads Khojastehand sets the parrot free.

Next post Magic of Persia: Dubai Nights 2012, Exhibits and Auctions