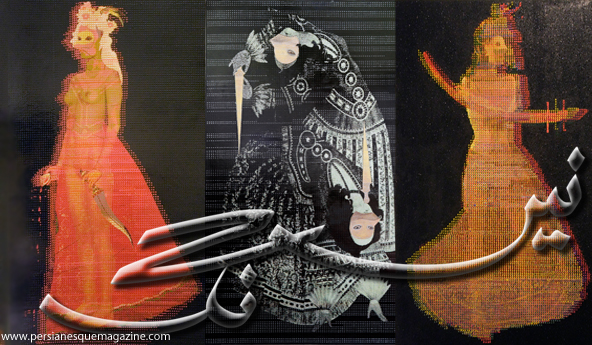 “Arimas”, a group exhibition   with   works   by  Iranian artists, Samira   Hodaei   and   Samira Alikhanzadeh, will be on display at Ab Gallery  Lucerne-­‐Emmenbrücke.

Carrying the same first name and both living in Tehran, these two artists deal with the role of women in society in both historical and contemporary times. Although they have each developed very special techniques, their common trait is the adaptation of found images that are entwined with manual work, giving the works a haptical character.In  her  newest  series  “Dancing  the  Sharp  Edge”,  Samira  Hodaei  shows  pictures  of  women  in  different postures,   dancing,   in   twisted   positions,   equipped   with   knives.

Inspired   by   paintings   of   the   Qajar Dynasty  that  are  known  for  their  very  strong  coloring  and  intense  texture  on  canvas, she  created her  own  visual  world–one  that  emerges  from  the  mixture  of  a  traditional  approach  and  the  digital adaptation.

In  her  pictures  Hodaei  takes  over  the  ornamentation  of  the  Qajar  pictures  and  transfers  the  fine texture  of  the  points  on  the  canvas  in  one,  using her own paint  technique  with  glass color.  The  tiny  rises  produce  together  with  the  substance  of  the  material,  a  tangible  (as  well  as  three dimensional)  intensity  that  is  experienced  even  more  by  the  overlapping  colors  and  layers.

Combining  little  mirror  fragments  with  found  portraits  Samira  Alikhanzadeh  questions  our perception  of  time,  of  the  past,  the  future  and  the  present.

Looking  into  the  little  mirrors  the  viewer might  meet  his  own  gaze.  In  this  way  the viewer  not  only  becomes a part  of  the  artwork  but  of  the  past,  the world  which is depicted  in  Alikhanzadeh’s  works.  By  immersing  in  the  past  for  a  little  moment impermanence  becomes  visible  which  is  also  increased  by  the  quantity  of  the  depicted. By  visualizing  the  past  she  challenges  the  present.

*In  addition,  the  exhibition  “Simply  Words?”  featuring the work of Farideh  Lashai  will  be  shown  at  Ab Gallery  Lucerne, while the exhibition “Disturbance and Contemplation” featuring works by Baktash Sarang at AB Gallery Zurich.