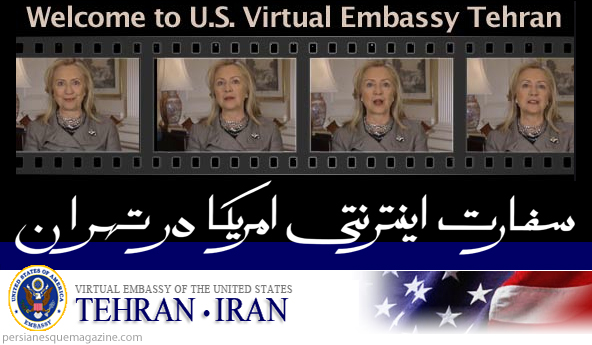 Has the just launched Virtual Embassy of the United States Tehran, Iran been blocked in Iran already?

What could the reason for the block be?

Perhaps the bandwidth was overwhelmed by masses of people trying to access the site which led to such a reaction?

However, it is safe to conclude that this move on the part of the US Department of State seems to be a well-intentioned effort to connect to the people of Iran.

Recently, the web has allowed for some interaction amongst Iranian people and the US: Whether it was done through the @USAdarFarsi Twitter account and/or Facebook page, this “desire for dialogue” has grown.

“The feedback we have received from ordinary Iranians led us to try something new:  a website designed for Iranians– in Persian, shaped by what you wanted, and an opportunity for you to tell us more about what you think and why.  In response, we have created Virtual Embassy Tehran to offer you another perspective and another source of information, so you can make up your own minds about the U.S., our concerns about the Iranian government’s activities at home and abroad, and our serious efforts to achieve a resolution to those concerns,” the Virtual Embassy states while reaching out to the Iranian people with its mission.

And although the website is not a “formal diplomatic mission, nor does it represent or describe a real U.S. Embassy accredited to the Iranian Government,” the Virtual Embassy intends to “work as a bridge between the American and Iranian people.”

Earlier this year, President Obama said: “You, the young people of Iran, carry within you both the ancient greatness of Persian civilization, and the power to forge a country that is responsive to your aspirations. Your talent, your hopes, and your choices will shape the future of Iran, and help light the world.   And though times may seem dark, I want you to know that I am with you.”  Secretary of State Hillary Rodham Clinton shares the same outlook and has assented to the President’s statement during her appearances on VOA and BBC.

“It is in that spirit that we launch our Virtual U.S. Embassy Tehran.  It is our Mission to the Iranian people.  This place is for you.  We hope you stay a while,” the Virtual Embassy concludes on its “About” page.

How do YOU feel about this effort?

Welcome to the United States’ Virtual Embassy in Tehran.

The United States maintains diplomatic missions all over the world in order to communicate with other governments, facilitate trade and commerce, and support mutual understanding and respect. Because the United States and Iran do not have diplomatic relations, we have missed some important opportunities for dialogue with you, the citizens of Iran. But today, we can use new technologies to bridge that gap and promote greater understanding between our two countries, and the peoples of each country, which is why we established this virtual embassy.

This is a platform for us to communicate with each other—openly and without fear—about the United States, about our policies, our culture, and the American people. You can also find information here about opportunities to study in the United States or to obtain a visa to come visit us.

We hope that this virtual embassy will prove to be a useful tool for you, and we welcome your feedback.  So, please visit our Facebook and Twitter pages to leave your thoughts and ideas about how we can engage even more and deepen our relationship.

Thank you so much for visiting, and I do look forward to hearing from you.

Next post Omid Foundations: Color of Love, Artists for Hope

Previous post Love and Devotion: From Persia and Beyond