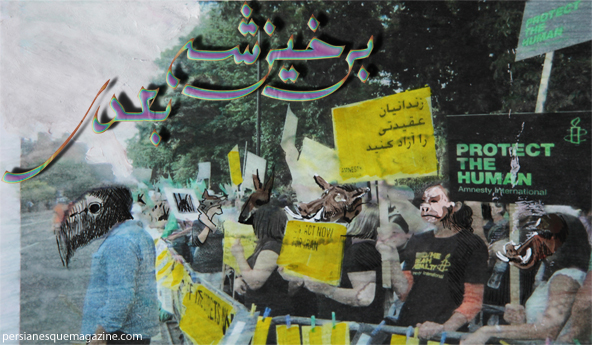 Original Image: From the series "Confused by the Spectacle Around Me", by Rokni Haerizadeh

“It’s useless to wait-for a breakthrough, for the revolution, the nuclear apocalypse or a social movement. To go on waiting is madness. The catastrophe is not coming, it is here. We are already situated within the collapse of a civilization. It is within this reality that we must choose sides.” – The Coming Insurrection

“The State” presents a group exhibition running from November 10th-December 3rd, 2011 at Traffic in UAE, which takes its title from the book The Coming Insurrection (2007) by “The Invisible Committee”.

The show is a continuation of The State, a socio- historical journal & forum, and a symbolic transition from the last exhibition “Social/Antisocial?”, which dealt with socialization and the current state of people and behavior.

The exhibition is a response to the causes of discontent, namely mass injustice, corruption and greed in our societies and world at large. It calls for a paradigm shift of human expression, to prevent an emerging social condition. It is not a call to arms but an attempt to get people thinking about the global transmutation that surrounds them.

The Invisible Committee is the collective pen-name for a small group of French post- Situationist intellectuals and academics, who in 2007 authored The Coming Insurrection, and in 2008 were arrested in France on charges of terrorism. The Coming Insurrection is a commentary on contemporary society and the building revolt against governmental and economic oppression. It references collapsing economies, crashing monetary systems, corrupted democracies, environmental degradation, global crises, riots, protests and above all, a moral and social decay.

People all around the world have witnessed the collapse of a system, a disintegrating modern social order. Which may just be getting worse. As Mark Twain once said, ‘History does not repeat itself, but it does rhyme.’ Despite glimmers of hope for change, through the likes of Barack Obama’s 2008 political campaign, we are still in a dire state.We have recently seen the revolutionary Arab Spring, riots and looting in London, among other communal uprisings.

As Rami Farook, Emirati curator & social–historian, explains: “The works presented share the perspective of The Coming Insurrection and deal with reasons for the current social condition, illustrating examples of it, and providing remedies. Similar to the book, many of the works touch on aspects of the self, social relations, work, the economy, urbanity, the environment, and civilization, while searching for a social solution to the present. It is our duty as citizens, activists, mentors, monitors and advisors to raise a clamour to change the conditions. By being warned, the insurrection might be prevented. An uprising is one thing, a successful revolution is another.”

* The show’s opening will include an hour-long music performance by singer/songwriter Gayathri and a big-band ensemble. The performance is an homage to 1940s jazz club days and will mark the release of her single as well as limited edition LP and music video.

Next post Love and Devotion: From Persia and Beyond

Previous post Bahar Behbahani: The Chronicle of Her Innocence