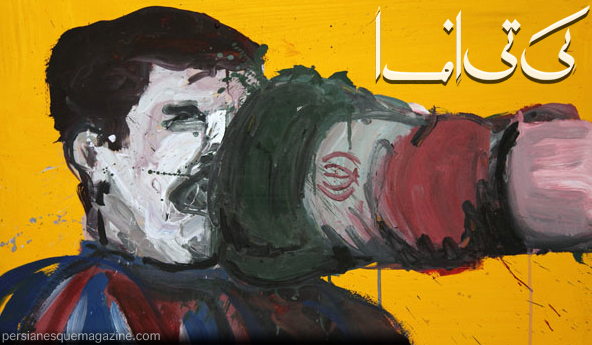 KTFO (2010), By: Hessam Rahmanian, acrylic on paper via Traffic

Opening this fall on September 21st (at The Third Line) and running through October 20th, 2011 several Iranian artists represented by The Third Line and Traffic will be exhibiting at the two spaces. The show attempts to question and discuss the state of the contemporary environment through artistic representations depicting social behavior, ecology, and psychology.

“Social/Antisocial?” is inspired by and, a continuation from, previous shows at Traffic also titled ‘The State”(2010): “Social/Antisocial?” resumes the dialogue explored earlier in The State, which questioned the socio-political state post-September 11; as well as the showing of Uppers & Downers (2011) which ran a commentary on the global condition, from an economic perspective, with the city of Dubai as a focal point. This third installment of investigation combines works from the collection of The Third Line, Traffic and The Farook Collection, and is exhibited at both galleries to connect the conversations previously limited to one physical space.

This exhibition aims to move beyond mere presentation and aspires to act as a forum on socialization and the current state of people and behavior. With a focus on the various social aspects of the current “state” of today, the show puts a mirror up to the face of society for self-observation and self- reflection through the subjects of the works themselves, as well as the social, psychological and emotional impact on the viewers.

The works featured at both venues examine the social and human condition by posing questions about how society operates. Artists such as Arwa Abouon and Slavs and Tatars question belief in faith, tradition, and ritual; Fouad Elkoury, Hassan Hajjaj, Ahmed Mater, Hesam Rahmanian document the everyday in all its glory; Tracey Emin, Susan Hefuna, Damien Hirst, Huda Lutfi, and Youssef Nabil depict emotional expression, nostalgia, and memory; and James Clar, Abdulnasser Gharem and Aman Mojadidi address the aspect of the anti-social.

The State: Social/Antisocial? takes the viewer on a journey of self discovery with the artworks at its starting point, contemplation as its road, and self revelation as its ultimate destination–defining society as individuals, and as a collective.

On September 22nd, at the show’s opening at Traffic, there will be a one-hour musical performance by Bunty (aka Kassia Zermon). Bunty is part of Brighton-based collective Beatabet. Using just her voice, fx pedals and a mash of real and made-up languages she whispers, beatboxes, claps, stamps and produces frenzied harmonies to create her music live from scratch.

Created by Rami Farook in 2007 as a social arts organization, to create, exhibit and exchange, Traffic’s 10,000sqft space combines commercial shows with public programming. It serves as a platform for emerging and established artists, from the region and beyond, and is the permanent home of The Farook Collection, which spans over 300 works. Other aspects of Traffic include an educational program, a bookstore and a ping-pong table.

About The Third Line

Next post Work of Art on Bravo: Interview with Persian Artist, Kymia Nawabi