In his first solo exhibition, Reign of the Shah, inspired by the Shahnameh (Book of Kings), UK-born artist, Bilal Aquil narrates a story of the assassination of a Shah of the Imperial Court and the subsequent battles that follow to avenge his death and establish the power of the new Shah. 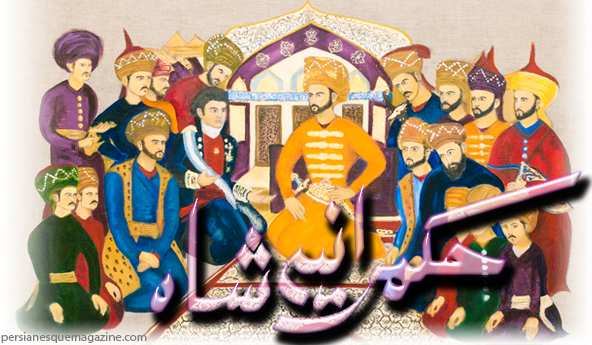 "Shah Receives the Duke", Oil and gold leaf on linen, 2011 by Bilal Aquil (Courtesy of the artist)

In his first solo exhibition, Reign of the Shah, inspired by the Shahnameh (Book of Kings), UK-born artist, Bilal Aquil narrates a story of the assassination of a Shah of the Imperial Court and the subsequent battles that follow to avenge his death and establish the power of the new Shah. Aquil presents a series of paintings which orchestrate battlefields with Persian miniatures fused with Aquil’s interpretation of Goya’s ‘The Disasters of War’ etchings, ‘The Second of May 1808’ and ‘The Third of May 1808’ masterworks at Traffic, Dubai.

Aquil’s work stems from a long-time interest in Persian and Mughal miniatures. He draws on inspiration from the elaborately illustrated Persian manuscript, the Shahnameh, that tells the story of Iran through the seventh-century Arab/Islamic invasion of the Sassanid dynasty.

Written by Persian poet Ferdosi, the Shahnameh preserves the identity of the Persian culture with epics of love, war, battles, and kingship. The Shahnameh was originally created for for Shah Ismail (1487-1524), the first Safavid Shah of Iran and his son, Shah Tahmasp (1514-1576). Aquil adapts the spirit of the stories by juxtaposing Persian miniatures from the Shahnameh battle scenes with figures from Western masterpieces.

Aquil’s artistic intention is to capture the horrors of war and the futility of conflict based on cultural differences. He has tried to convey his vision using two radically different styles of art that are beautiful in their individual ways but can also unite to create a diverse and rich splendor.

Aquil uses Persian miniatures to symbolize the East, and Goya’s Baroque-Romantic expressionism to represent the West; interwoven together to depict today’s underlying tension and conflicts in the integration of Eastern and Western cultural identities, as witnessed by the artist.

Aquil’s Persian miniatures are reminiscent of the Safavid era which are rendered with a contemporary feel and are layered against Goya’s works depicting violence, disorder and chaos. His interpretation of the two styles of painting contain dark tones and bold brushstrokes, influenced by Goya and Rembrandt.

Enjoy our interview with the artist, below:

PEM: What inspired your interest in the Shahnameh for this series?
BA: My fascination with the Shahnameh stems from my childhood as well as my exploration of Persian miniature paintings following an extensive study of Islamic art and architecture at university. I studied at the School of Oriental and African Studies (SOAS), University of London, gaining significant exposure to Islamic, Persian and Oriental arts.

When and where did you create the pieces, and how long did it take?
I obtained a large amount of inspiration during my travels to Isfahan, Madrid and London (the British Museum and British Library hold the largest collection of pages from the Shahnameh) over the past 18 months. I was sketching out ideas and the constant thought that came to my mind was formulating the best way to fuse these two varying painting styles in a contemporary manner. I wished to achieve a dynamic, yet harmonious, contrast between the two distinct styles to preserve the symbolic conflict between Eastern and Western perspectives. I executed the paintings in my studio in Dubai and this process took around 12 months. The time spent on each painting varied but most of the paintings have been worked on simultaneously.

What made you choose to use the form of Persian miniature art?
Persian miniature art is mind blowing.  I’m fascinated by its beautiful compositions, amazing finely-brushed detail, vibrant and lively hues, amusing facial and hand expressions, and the majestic illustrated tales of the court and of war.  In my opinion, the best form of art and architecture during the “Islamic Empire” was that of Persia and in particular during the Safavid Empire.   I chose Persian miniatures to symbolize the East as well as to be representative of
the inherent traditions and sophisticated cultural heritage that we retain.

What is your favorite Shahnameh tale?
There are so many tales, such as the stories of Bizhan, Bahram, Key Khosrow which I enjoy, but my favorite is the battle between Rostam and Esfandyar. This is one of the longest tales in the Shahnameh which narrates a story with heightened drama, tensions, various missions of Esfandyar as set by his father and the poetic dialogue exchanges between Esfandyar and Rostam.  I have interpreted the battle scenes and the preparation for the battle from this tale and replaced this by Western characters.  The series also includes a contemporary portrait of my imaginary interpretation of Rostam and his character.

What similarities (and/or) differences did you find between Persian miniatures and the work of Goya, while compiling the work?
On the face of it, they are different aesthetic styles; Goya’s works are rendered in chiaroscuro with earth tones whereas the Persian miniatures are flat, rich and decorative. Goya painted in a form of Baroque-Romantic expressiveness with soft blended strokes and multi layered oil painted glazes. This style later changed to incorporate bold expressive brush-work, a darker palette of colours and greater dark and light contrasts, almost in a form of quasi-impressionism. I felt these styles of painting whilst executing the works which provided greater depth to my body of works. In contrast, Persian miniaturistsmay be viewed as an institutional body of artists (such as as AqaMirak, Mirza Muhammed, Mirza Ali) who were taught a stylized form of painting. The common styles, particularly during the Timurid and Safavid dynasties had a very decorative feel, rich with patterns, borders, and an array of bright colours with an enormous amount of detail. Goya painted in oil on large scale canvases whereas miniatures were painted with Gouache using brushes as fine a single hair. Each stroke and detail was detailed and delicate and painted on sizes no larger than a page of A4 paper or the size of a passport. Pages of the Shahnameh would be finely burnished with Gold leaf which represented nobility and wealth. Goya achieved the use of gold by his brushstrokes and use of cadmium yellows and golden ochre’s!

The facial features of the miniatures had a tendency to be more flat and non-expressive, other than the magical index finger on the lip (to express shock: “oh!”) with comical head movements. Goya on the other hand depictedemotion and invited the viewers’ compassion. The illustration of the man in the white shirt who is pleading in the ‘Third of May 1808’ is a great example of this.

Otherwise, the underlying conceptual differences that I discovered whilst painting are minimal. I found many more underlying similarities. Goya was an artist for the Royal Court of the Spanish monarchy. Persian miniaturists (by artists such as Aqa Mirak, Mirza Muhammed, Mirza Ali) were all also artist of the Royal Court (commission by the ruling Shah’s, such as Shah Ismail and Shah Tahmasp). Both illustrated the royal families of their respective periods and the common thread between the two was that both forms of art depicted the rich and powerful in the highest form splendor and grandeur. Goya rendered etchings of humans with animal characteristics (see Goya’s Disaster’s of War and Black Paintings) which was very similar to the Divs and other mythical creatures illustrated in the Shahnameh. There are countless images of Persian miniatures hunting on horses. Goya’s “The Quail Shoot” (1775) bears resemblance to the hunting scenes observed in miniature illustrations.   Another example is Goya’s “The Snowstorm” (1786-1787) which is reminiscent of the Shahnameh’s “The Paladins in the Snow”.

In my series, I have rendered my interpretation of Goya’s “Second of May, 1808” and “Third of May, 1808” which capture the horrors of war. These scenes are similar to the battle scenes commonly found in the miniature illustrations depicting battles and the spoils of war.  Whilst there are differences in the two painting styles, the similarities include the poetic form of movement, everything from the falling horses to the rebels with knives. Upon closer inspection, the miniatures reveal a similar artistic poetry from their various battle scenes that almost appear theatrical in their brutal display of violence.In my opinion, both Persian miniatures and Goya’s works contain dark subconscious meanings.

What message do you hope to give your audience through your work?
I believe that it isn’t the place of the artist to impose strict interpretations of his/her works upon the viewer. Art is a personal window through which viewers come to their own conclusions and ascribe their own interpretations to the world that is depicted within. As far as my artistic intent goes, I wish to capture the horrors of war and the futility of conflict based on cultural differences. I have tried to achieve this with the juxtaposition of two radically different styles of art that are beautiful in their individual ways but can also unite to create a diverse and rich splendor.

What’s next?
My next body of work will examine the dualities, ideologies and interplay of Eastern and Western cultures. It will be a continuation of contemporary interpretation of the Shahnameh, including Rostam’s epic trials and tribulations. Watch this space!

Next post Wellness Tips: Keeping Healthy During the Summer