This is the first time that the illustrations in the manuscript—recently unbound and conserved—have all been exhibited together. 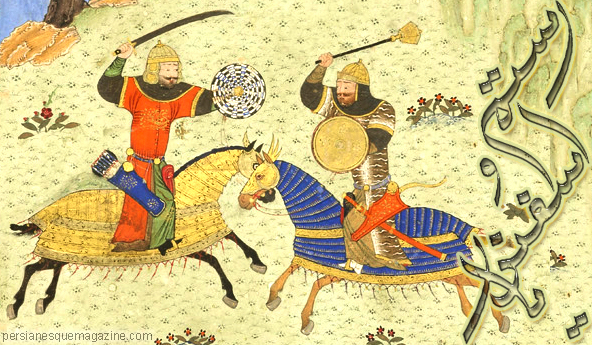 This rarely exhibited volume, now in the collection of the Royal Asiatic Society of Great Britain and Ireland, features more than thirty richly painted and illuminated miniatures that illustrate scenes from the Persian national epic, the Shahnameh (Book of Kings).

This is the first time that the illustrations in the manuscript—recently unbound and conserved—have all been exhibited together.

Although it is not known when the epic was first illustrated, countless copies of this poem have been made through the ages.

The intricately colored and gilded manuscript illustrations on view are among the finest examples of Persian painting.

Written by the Persian poet Ferdosi (ca. 935–1026), the nearly 60,000 couplet poem is based on a history of the kings of Persia, depicting legendary accounts of the beginnings of civilization until the Arab Muslim conquest that ended Persian rule in the seventh century.

“This is one of the most superb Persian manuscripts of its day,” said Asia Society Museum Director and Vice President of Global Art Programs Melissa Chiu.

“The rich colors, striking compositions, and intricate detail make the work truly remarkable in the long tradition of miniature painting. It has been one thousand years since this story was first written, and we are so pleased to celebrate this anniversary with a manuscript of such artistic and historical importance.”

As part of a series of related programs held in conjunction with the exhibition, in Shahnameh Live, Persian storyteller Iraj Anvar will be enacting a live performance of the tale of Rostam and Sohrab, in an intimate teahouse atmosphere on Thursday, April 21, 6:30 pm at the Asia Society Museum in New York.

Asia Society Museum’s Shahnameh exhibit will be on view through May 1, 2011.

For all program details and to purchase tickets, please visit AsiaSociety.org.

Love and Devotion: From Persia and Beyond