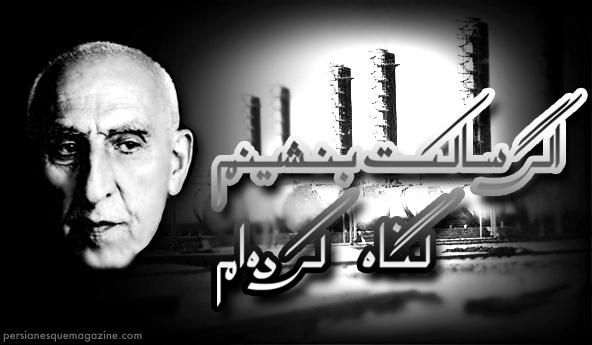 Mohammad Mossadegh, the Iranian politician and post-mortem folk hero, famously said: “If I sit silently, I have sinned.”

And in the recently launched interactive iPad application, Op Ajax, you’ll learn more about Mossadegh, why you may hear your grandparents or parents say from time to time: “Hamash kaareh Engeleessee-haast” (Persian: It’s all the work of the English), and the events that have ultimately led up to Iran’s current condition, through sleek, vintage-toned, comic-book style, touch-activated animation.

Op Ajax carries the exciting feel of a pop-up book, and offers users to take part in calling: Action!

The app tells a story using comic-book-esque dialogue, timelines, character information bits, and a pace of motion that can gradually start to feel like you’re watching an animated movie. (In fact, the app has the potential to spark a fantastic, big-budget hollywood project.)

One of the great things about the Op Ajax iPad experience is that it gives you an important history lesson without making you sit through a long class.

Some of the key players mentioned in the Op Ajax application are: Winston Churchill, the former Prime Minister of England; Mohammad Mossadegh, the democratically-elected Iranian Prime Minister who was deposed in 1953 (via Operation Ajax) for battling internal corruption, British colonialism, and nationalizing the Iranian oil industry; Agent XXXXX, a covert operative who was sent to Tehran to aid TP-Ajax; BP, a British-devised company, created with extreme motives for one-sided profit, the Anglo-Iranian Oil Company (AIOC), and more.

During his “A New Beginning” speech at Cairo University in Egypt on June 4, 2009, President Barack Obama remarked, “In the middle of the Cold War, the United States played a role in the overthrow of a democratically elected Iranian government.”

Inarguably, the 1953 Coup d’état (CIA codename: Operation Ajax), the ’79 revolution, the 2009 attempt at another revolution by the people of Iran, and the ongoing 25 Bahman protests all over Iran, further show–even to the least politically savvy mind–that Iranians want freedom and democracy.

CIA may have executed the plan (mission Operation Ajax), but the US alone is not to blame: The mastermind behind the fall of Iran’s attempt at home-grown democracy during that period of its history, is widely known to be the UK. Journalist Ebi Zaman opines: “The US was following the UK’s lead on this.  The UK pushed the US on to undermine Mossadegh, and as Iran was an unknown to US policy makers at that point in time, they took the bait and followed the UK’s misguided lead.  The UK was still in the Colonial mentality. Either colonialism had outlived its usefulness or Iran was different than other cases.  I doubt any US military or intel agancy had a Farsi speaker then.”

With more chapters coming soon, the full version of the app offers an insider’s view of the players in this ill-fated chess game, where Iran was set up to lose at all costs.

If you have an iPad, try it out for yourself. Find Op Ajax in your Apps Store and download it now.

Next post Sculpture Exhibition: The Tell-Tale Tart by Shirin Fakhim

Operation Ajax: The Story of the CIA Coup that Reshaped the Middle East

The Masked One: Interview with Iranian Artist ABCNT