Egypt: Hosni Mubarak to Christiane Amanpour, “I will die on this soil” 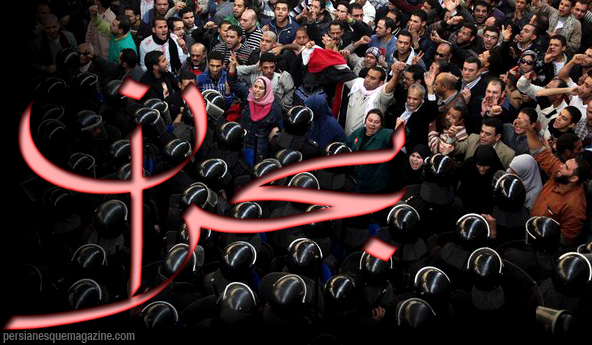 If anyone can relate to the Egyptians who are dealing with the ongoing physical, emotional, and psychological distress resulting from coming face to face with the brutal force of their government, it’s us, Iranians.

(We just hope that the Egyptians have a good replacement picked out.)

After being asked to leave and confronted on camera in the streets of Egypt, Christiane Amanpour has met with Hosni Mubarak and his son Gamal.

“I would never run away, I will die on this soil.” Hosni Mubarak said to Amanpour during their exclusive 30-minute interview at the presidential palace in Cairo.

“He told me that he is troubled by the violence we have seen in Tahrir Square over the last few days but that his government is not responsible for it. Instead, he blamed the Muslim Brotherhood, a banned political party here in Egypt.” Amanpour adds.

He went on to tell the renowned journalist that he’s “fed up with being president and would like to leave office now, but cannot, for fear that the country would sink into chaos.”

Claiming that he’s indifferent to the insults and calls for him to leave, Mubarak told her: “I don’t care what people say about me. Right now I care about my country, I care about Egypt.”

“I was very unhappy about yesterday. I do not want to see Egyptians fighting each other.” He said to her in response to her question about the “violence that his supporters launched against the anti-government protestors in Liberation Square”.

Click Here for more coverage of the Crisis in Egypt, featuring exclusive reporting from Christiane Amanpour.

Previous post Iranian DJ: Yasmin Shahmir "On My Own"