Not your Average Snooki: Q & A with Lake Shore Potential Housemate, Persia

"I can definitely stir up a mean ghormeh sabzi, zereshk polo, and adas polo!" She says in response to whether she's planning on cooking for her would-be housemates. I would love to cook for my roommates, I think it would be a great idea, bring some Persian flavor (literally) to the show." 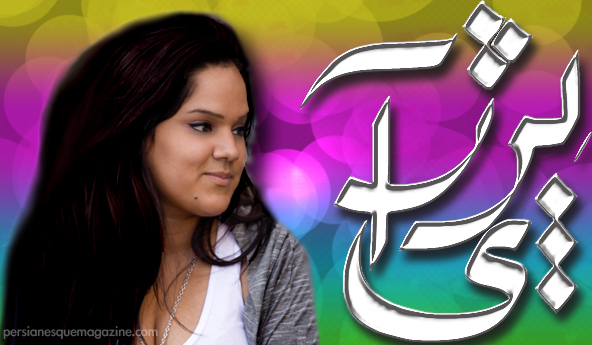 A potential cast member on Canada’s Lake Shore–a reality show where eight cast members from different backgrounds and sexual orientations move into a house together, and learn how to not step on each other’s toes–Iranian-Canadian, Roxie aka Persia, says of the forthcoming TV show:

“It’s not a competition; it’s all about [our] differences!”

“It’s a really cool area of Toronto,” Persia tell us. “It’s literally right by the lake shore, which is also minutes away from downtown Toronto where all the hottest private parties take place.”

Not just a party-girl, Persia can cook too:

“I can definitely stir up a mean ghormeh-sabzi, zereshk-polo, and adass-polo!” She says in response to whether she’s planning on cooking for her would-be housemates.

“I would love to cook for my roommates, I think it would be a great idea, bring some Persian flavor (literally) to the show.”

Check out our fun Q&A with feisty Persian girl below:

How did you get involved?
I had been doing some video blogging on youtube under the name PersonalPersia when an insider told me about auditions being held in Toronto. I loved the idea. I wanted to be a Persian Culture Ambassador, so I auditioned.

How confident are you that you will be chosen?
Very confident. I believe with the support of my community and the support of all other Persia fans that I will be a cast member of Lakeshore.

How big do you think the show will end up being in Canada? Anything like the Jersey Shore craze is in the US?
I don’t want to jinx it but from what I see and the public’s reaction this far, it might even be a bit bigger than Jersey Shore as it reaches a larger audience. Lake Shore’s focus is more on the interaction of the 8 different ethnicities rather than it being a Canadian show about just Canadians (even though it really does sweeten the deal, us Canadians get crazy too!) Rumour has it though, that a lot of international networks are in negotiation with the show’s producers, so who knows… maybe Persia will be international!

How do you think Lake Shore compares to Jersey Shore? (If at all.)
There’s definitely going to be lots of Drama and probably even more Drama than Jersey Shore because there will be some huge culture clashes on the actual show. Guaranteed. It’s as if the UN were to hold a UFC fight lol…I’m kidding! I like to joke around, did I tell you that yet?

What’s the Iranian-Canadian lifestyle like?
Hectic. As a woman, any situation in life  can be just a tad bit more difficult, as you have to be in constant competition with men as well as other women, now add on the fact that you’re Iranian…So much to take into consideration. Family is huge for me so I always have to fit in some family time in my crazy schedule. I’m an event coordinator so I’m always on the run, I never have time to be idle so when I do have free time, I need to divide it evenly. For example Sundays, I wake up, toast some Noon Barbari (Persian bread), get out the cheese, water melon, sabzi (Persian: greens), butter, honey and make some Chai, and basically deliver my family an authentic Persian breakfast. After that, I get dressed and I get on with my work side of life, I work with a lot of Toronto artists, so my fun usually consists of photo shoots and video sets and when that’s all done and I can actually go out and have some real un-work related fun. You can catch me at a Persian hukkah bar or at a house jam or even playing pool with the boys. I’m the most versatile person the world has ever met. I don’t like to stay secluded in a box. If something’s fun, then I already like it! I’m me and that’s my lifestyle and I wont ever compromise myself for anyone.

Why do you think you should be chosen?
I’m effortlessly entertaining but I have balance. I know when enough is enough and I know when I’m making, not only myself look bad, but also a entire demographic of people I’m representing, like I said before, I want to be a Persian Culture Ambassador, I want to change the way the world looks at us, we aren’t terrorists, we’re people, who are JUST as entertaining and fun to watch as the rest of the world. We deserve that recognition.

How do you think your Persian background will help you stand out?
I speak “Per-glish” all day. For example I use the word “haalaa” (Persian: now) and “baba” (Persian: dad/man) a lot in my sentences so much so that my own non-Persian friends tend to use the words too now haha. So that’ll definitely be one reason and the more obvious is my mindset, I think differently than most people. I’m an observer and I come from a family that’s embraced so much of our Iranian culture that it’s embedded in me. It’s evitable that it’ll channel through me.  Midnight chai-breaks at the Lake-Shore house!

How many bags do you think you’ll be packing to move into the house, if you’re chosen?
Hah, this is a good question. Who knows, I’m assuming 3-4 suit cases. I have to admit I’m a chronic over packer.

Are you going to be calling your mom for some Persian-style advice, like MTV Real World alum Parisa Montazaran did?
Oh for sure. My mother is my backbone. I love her and I know that I might not be that stereotypical perfect Iranian daughter but I do make her very happy. I love talking to my mother because a lot of the wisdom I have now at this age is because of her and her amazing ability to raise her children. I don’t want to break any hearts but I think I got the coolest Persian Mama ever! And I’m hoping her and my Aunt would visit on the show and cook up a storm in the Lake-Shore Kitchen!

What is your career goal?
Finish my bachelors in Criminology, go off to Law School and continue with the entertainment industry. I love the Arts!

Do you plan on being a TV personality? Or is Lake Shore going to be it for you?
Good question. I think it’s safe to say…Persia’s here to stay! I don’t want to walk away from this being just another reality show star. I want people to remember me as someone who made a difference, someone who changed pop culture’s perspective on Iranians, especially young Iranians. So with that said… I’m open to different opportunities.

What’s something you don’t want your parents/family to see you doing on camera?
I’m not sure to be honest. I’m a handful of surprises so who knows.

Why do you go by Persia? Roxie is pretty name too…
Persia just sort of happened one day. In the group of friends I had at the time I was the only Persian, and at that age everyone goes by nick names. They started to call me Persia and I kinda liked it so I kept it. I also feel like Persia is who I’ve become, and to me “Persia” embodies all that I adore in Womyn and humanity. She’s strong, out spoken, opinionated, compassionate, educated but still sexy. Every womyn has a little Persia in them.

If people want to help you get on the show,what’s the best way for them to do so?
By voting for me on LakeShore site or by going to this direct link.

Next post Train to Tehran Fest: DJ Namito and Friends in Malaysia

Previous post US V. Iran in FIBA World Championship Games: Nothing but Love Amongst Players