Director Robert Adanto's new documentary film "Pearls on the Ocean Floor,"--shot in London, Berlin, NYC, San Francisco, and Leipzig--while a "friend provided some footage from Tehran"-- interviews some of the most influential Iranian female artists living and working in and outside of Iran. 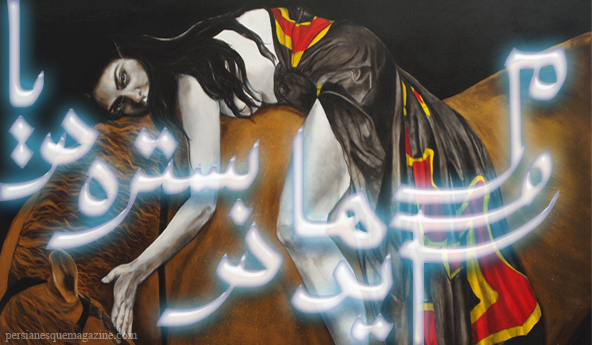 “This is the second film in which I’ve explored the lives of artists who have to navigate the challenges and restrictions imposed by a political system. In The Rising Tide (2008), I looked at Chinese artists under the age of thirty who were using video and photography to capture the tumultuous changes sweeping through the Peoples Republic of China. In my opinion, there is no greater calling and nothing more threatening to some in power than the act of creation: shaping something from nothing, bringing order, beauty and meaning into existence and stirring the heart and mind: Altering the space,” the NYU-MFA-graduate tells us in an interview about his inspiration for making this movie.

“I wanted to make a film that goes against the western media’s attempt to classify Iran as a scourge and defies all the verbage of the ‘Axis of Evil’: Through my personal studies I know Iran to be a nation with a profound antiquity and profound development and achievement. This richer, more complex Iran is hardly taught or examined in the West, and if we are not to be completely bewildered by events, we need to try to understand more about the complex, rich history of Iran that pulls so many threads of its past into its present. The Iranian women in Pearls on the Ocean Floor, whether they live in Islamic Republic or in the Iranian diaspora, come from a vibrant and robust culture, and they speak with a compelling, striking boldness. Many of them are confronting issues of identity, gender, and the contradictions that arise when secular modernity meets religious tradition, and all of these ideas motivated me as a filmmaker on this project.”

And although the film took “sixteen days less than a year” to make, Adanto chose his titillating cast…Partly based on his computer skills: “Except for Shirin Neshat, I met [some of the other artists] in NY during the Chelsea Museum’s seminal exhibition Iran Inside Out and via Facebook–navigated the internet for their personal websites and galleries. I need to thank Richard Vine, the senior-editor at Art in America, for connecting me with Ms. Neshat. Richard was a fan of my earlier film The Rising Tide, and when I mentioned the female focus of the Iran project, he promised to make a call for me.”

His most memorable moments during the process of making Pearls on the Ocean Floor?

“I fell in love with one of the artists,” shared Adanto. “It began with regular Facebook conversations, and I was convinced after we met up to do the interview. We live too far apart right now and she doesn’t share the same feelings…At the moment.”

(We must admit: We can’t blame the passionate director for his persistence–Persian girls are quite hard to resist!)

Adanto, who hopes to go to Iran and visit “Tehran, Shiraz, Qom, Persepolis, and Esfahan,” had this to say when we asked him the all-time fan-favorite interview question that originated with us: “What’s your favorite Persian dish?”