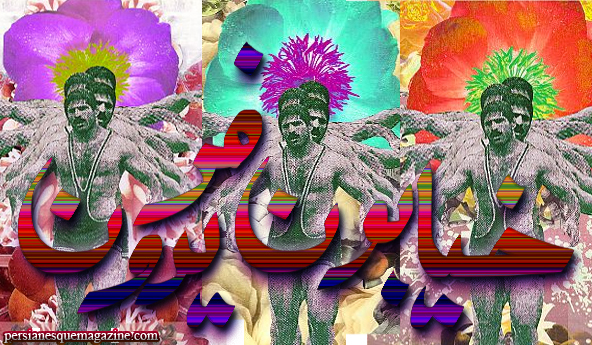 “Why seekest thou to know Rostam the Pahlavān?

Surely thou wilt know him in battle, and he shall strike thee dumb, and quell thy pride of youth. Yet I will not show him unto thee.“

Janet Rady Fine Art is delighted to present their inaugural show–in their new space at La Ruche in Whitechapel–a selection of works from four series by acclaimed Iranian artist Fereydoun Ave. (Each of these works depicts the pre-Islamic wrestling hero Rostam, a character drawn from the Persian poet Ferdosi’s epic Shahnameh–Book of Kings).

Fereydoun Ave was born in Tehran in 1945 and completed his primary and secondary education in England. With a career grounded in the theatre and film world, he gained a BA in Theatre Arts from Arizona State University in 1969 and studied film at New York University in 1969-70. Prior to the Iranian Revolution, he worked as a stage and graphic designer at the Iran American Society in Tehran, was Resident designer for the National Theatre, Tehran, and was advisor to National Iranian Television and the Shiraz Arts Festival.

Using images of a well known contemporary Iranian wrestler or Pahlavan (strong man) to portray Rostam, the artist pays homage to Persian tradition and a particular fondness for the past; the wrestler gloriously embodying these cherished values.

The exhibition of Ave’s Rostam works comes at a particularly fortuitous time, as 2010 marks the 1000th anniversary of the writing of the Shahnameh and with such visually arresting images, offers us an opportunity to reflect on the glories of a bygone universal age of chivalry.

The four different series, none of which have previously been shown in London include Ave’s most recent Rostam works, Radioactive Rostam (2010), reproduced as limited edition inkjet prints on canvas. In this new series Rostam is depicted amongst lavish blooms, his figure duplicated with multiple arms, reminiscent of supernatural Hindu gods and goddesses, in evidence of Ave’s innate spirituality. Yet, as international tensions rise over the development of Iran’s nuclear programme, these works also boldly engage with the debate as the artist employs the metaphor of his old symbolic hero depicted in combat with an unknown character.These works mark a departure from Ave’s last, more sombre, series Rostam in the Dead of Winter (2009) also showing, where we saw our hero wandering amidst a foreboding and uncharted territory of rapacious hyenas and vultures, again inviting comparison with the current political situation in Iran post the June 2009 elections.

Ave’s work is represented in various collections in the US including that of his friend and mentor, the legendary painter Cy Twombly’s Foundation; as well as the Tehran Museum of Contemporary Art; the Centre Georges Pompidou, Paris; Lloyds Bank, Geneva, and the British Museum, London.

The current exhibition will be open Wednesdays to Sundays 12 noon to 6 pm visit janetradyfineart.com for more info.

Next post Ida Saki: So You Think She Can Dance?