Comedy Show: Max Amini and Friends Coming Back to DC! 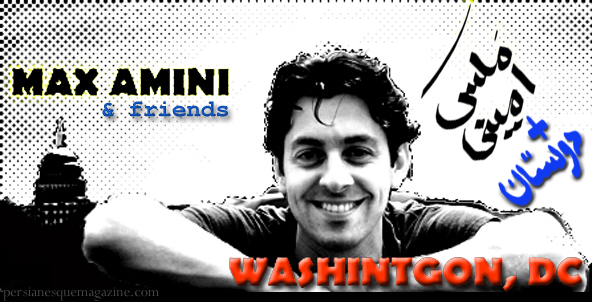 “A Mexican, Middle Eastern, Asian, and Black guy walk into a bar….”

When that line appears…You know Max Amini is about to show up!

Headed back to his hometown for what’s sure to be yet another sold-out set of shows at the Bethesda Theater, the hilarious Persian comedian known as Max Amini (try repeating his full name aloud and fast, it’s fun) brings his–and his multi-colored lineup’s–versatility to the stage with nonstop LOL-esque laughter.

(And trust us: You don’t want to miss seeing Max perform live.)

The Iranian-American actor/comedian’s East Coast stop on June 11th and 12th will be brought to you by Exotic Imports and is said to be a PG-13 show benefiting YouthActionNet.org; a global charity launched in 2001, that supports aspiring and accomplished young leaders through providing skill-building, access to networks and resources, and advocacy opportunities.

We hope that the multi-cultural group of comedians inspires you to invite all your non-Perrzhie friends to join in on the fun too.

Stay ahead of the game: click here to buy your tickets now, before they sell out.