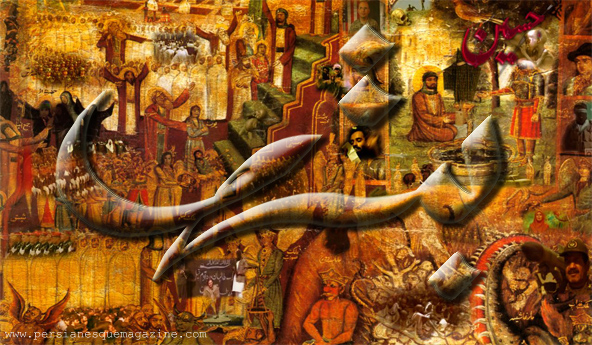 In the early 20th century, coffee house-style painting flourished in Iran. Based on Persian mythology, the large paintings depicted the heat of battle, the afterlife and martyrdom, truth and justice, and the apocalypse. The paintings expressed respect for religious and traditional beliefs and served as a backdrop for entertainment in the coffee houses of Iran as storytellers would act out the epic scenes depicted in the paintings.

Azari has appropriated coffee house painter Mohammad Modabber’s, The Day of Judgment, a painting dense with imagery and symbolism, and turned it into video work projected onto canvas, Coffee House Painting, 2009, infused with images of today’s saints and sinners.

The Icons series, 2010, is comprised of five video works that appropriate popular posters of saints in Iran. Inspired by how Renaissance painters humanized religious figures, Azari seeks to make icons resonate in a new way.

Iranian-born Shoja Azari has lived in New York City since 1983. His films and video installations have been screened and exhibited widely around the world. Most recently, his video work has been seen in solo gallery exhibitions in London; Turin, Italy; and Köln, Germany, and at art fairs including Art Basel, Switzerland, and ARCO, Madrid. Since 1997, he has collaborated with Shrin Neshat on film and video installations including Women Without Men, which won the Silver Lion for best director at the 2009Venice Film Festival. He has also collaborated with Shahram Karimi on video paintings which project video on painted surfaces.

Video work by artist and filmmaker Shoja Azari will be on view at Leila Taghinia-Milani Heller (LTMH) Gallery from May 4-27, 2010.

Next post Shirin Neshat's "Women Without Men" Opening in NYC