Jersey Shore, The Persian Version: Calling all Princes and Princesses of Persia 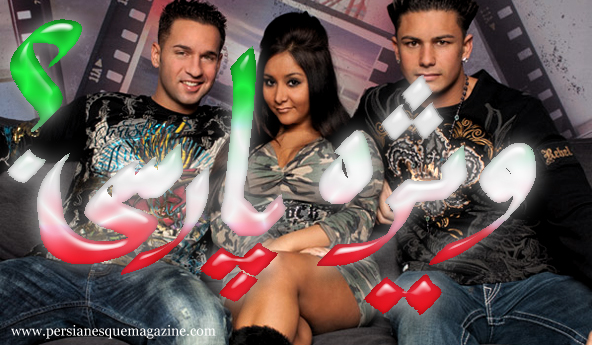 Did we call this one?

Or…Did we call this one?

Nearly four months ago, in a chat with Persian comedian K-von, we asked the Disaster Date actor  if he thought it was time to showcase a Persian-filled cast series, to which he responded:

“Of course. I have been giving [MTV] ideas for possible shows for 5 years now. I think I’m like an annoying kid that keeps asking his parents for things. I bet I can wear them out! I think they should have a show where they send a beautiful Persian girl and a half-Persian comedian around the world to party at the most exotic hot spots and do on-site filming of the trip. Each week it could be somewhere different like: Dubai, Hawaii, Thailand, or Paris.  It’d be a mix of the Travel Channel and the Real World; I would call it ‘Persians in Paradise.’”

So it didn’t turn out exactly as K-von’s most recent pitch suggested, but listen up all you Persian Princes and Persian Princesses your time to shine–albeit in reality-TV-show land–has arrived.

The situation is: “The Persian Version“, we’ve confirmed, is casting for Iroonies (Iranians)!

Not wasting any time, Doron Ofir Casting is looking for “Los Angeles[-based] proud Persian-Americans who rule the Hollywood nightlife and own Beverly Hills” for the Perzhie-filled show.

“Two thousand years ago the Persian Empire ruled the ancient world…but they didn’t have your soundtrack, your style, or your swagger! Today there’s a new Persian empire growing right here in LA and it’s ready to conquer the world all over again. It’s a bad-ass new dynasty where exotic beauty and wild style dominates the sexiest nightlife, exclusive venues and hottest beaches the modern world has to offer.”

Tehrangeles Persian-Americans own most of LA’s hottest venues–and probably have at least a load of “buddies” or “cousins” who are at home in their VIP sections far too often–so it shouldn’t be too hard to find the cast type they’re looking for.

“Its time to show the world that being Persian-American is a celebration of the American dream” says Doron Ofir Executive Casting Director.

What Persian versions are they looking for?

If your life is “all about Gucci, Gabbana, Cavalli and Cristal” or if  buying anything “from BMWs and Bugatis, to Mercedes and Movado–money is no object,” then you basically qualify. But, you must be “at least 21 years old, appear younger than thirty, outrageous, outspoken, and a proud Persian-American.”

Well, one thing we know is: They won’t have any problem finding a “proud Persian-American!”

If you want to be considered for The Persian Version make sure to email Persianversioncasting@gmail.com with your name, age, 2 pics, phone number, and why they should pick you…as soon as you’re done reading this!

Previous post Op-Ed: Why do some Iranians hate Soraya?