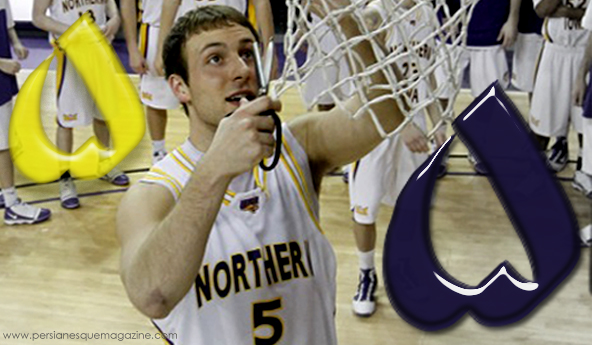 Shown cutting the net last month after their 61-55 win over Illinois State in a NCAA college basketball game  in Cedar Falls, Iowa, the newly-minted Northern Iowa college basketball star and good-Persian-boy, Ali Farokhmanesh, had a pivotal scoring hand in placing his team in the “Sweet 16” lineup.

The “haymaker/heartbreaker” is just one of the super-risky moves Farokhmanesh bravely used that led to his team beating out a ranked team like Kansas: An event that ESPN’s Pat Forde says should go down in NCAA tournament history as “one of the all-time no-no-YES! jump shots.”

In the end, Farokhmanesh and his team lost to Michigan State by a mere 7 points but we have a feeling this is just a glimpse of what’s to come for this particular Ali–whose dad also happens to lead a life in sports as a volleyball coach–and his “BK” skills.

“My teammates just call me Stroke sometimes. Or a lot of people just call me Muhammad.” Ali told an interviewer on March 23, 2010.

Which team will scoop him up?

We’ll root for any team this Persian athlete is on! (Cue live basketball pre-game hype-music.)