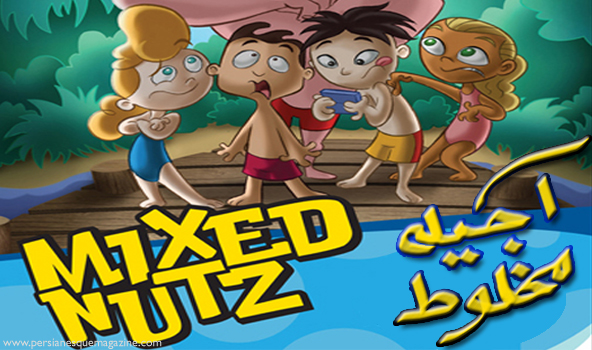 “If we’re not in your area, we’ll be on iTunes and other stations soon…,” says Big Bad Boo co-founder (and Persianesque Magazine’s Iranian-American woman of the year for 2009) Shabnam Rezaei.

Mixed Nutz, an independent new series with an updated Peanuts feel to it, showcases five friends from different places who are struggling to fit in. The cartoon features characters like Babak, a typical 9-year-old, who is afraid to tell people he is from Iran–the complete opposite of Babak is the colorful and sarcastic Sanjay who just came from Mumbai and loves everything Bollywood. Adele, is a half-Austrian girl who also just moved to Dyvercity and is a world traveler who has forgotten how to make friends. Jae, whose parents came from Korea, has aspirations to become a great golf player: Despite his father’s encouragement, he has trouble dealing with the pressure of the game. Briana, Sousanne, Miss Pickleberry, and the parents round out this fun cast.

Mixed Nutz will be airing Saturdays at 10:00 EST. Airtimes vary by station and region and can be looked up under Mixed Nutz Airtimes.