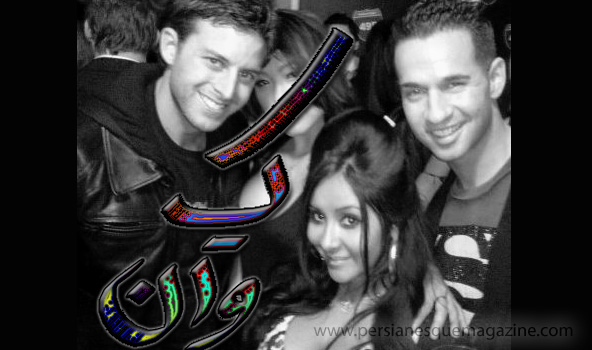 At a recent industry party in Hollywood, CA, Italian-Americans and Iranian-Americans had a little more than just their homeland flag colors in common. Iranian-American comedian, K-von, was hanging with MTV’s Jersey Shore cast members and current media-obsessions, Mike “The situation” Sorrentino and Nicole “Snookie” Polizzi.

Having been on “a handful of TV shows,” K-von is in talks with producers about being on yet another show.  “This was a great networking party for me and it became even better when the stars of one of today’s most talked about reality shows walked in the door and joined our table.” Says the “Bad Boy of Persian Comedy” of the partial Jersey Shore crew that “showed up 15 minutes after” he did.

“We talked about the show, their success, the fact that they get paid to go to parties now, and the rest was very casual stuff.” Adds K-von of his time with The Situation and Snookie. “I also congratulated Snookie on getting on Leno–since that’s been a dream of mine for years.  Most of all, I listened to them talk, so I can eventually use that harsh ‘New Joisy’ accent in my comedy act.  I can’t wait.”

The concept of ethnicity-driven shows–whether in the reality genre or not–is not only interesting but a foreseeable staple category contender in your future TV-show line-up.

So? Is it time for a Persian-filled-cast series on MTV?

“Of course,” K-von tells Persianesque Magazine. “I have been giving them ideas for possible shows for 5 years now. I think I’m like an annoying kid that keeps asking his parents for things. I bet I can wear them out! I think they should have a show where they send a beautiful Persian girl and a half-Persian comedian around the world to party at the most exotic hot spots and do on-site filming of the trip. Each week it could be somewhere different like: Dubai, Hawaii, Thailand, or Paris.  It’d be a mix of the Travel Channel and the Real World; I would call it ‘Persians in Paradise.'”

Next post Iranian and Gay: Interview with Comedian Mehran Khaghani

Previous post Funny in Farsi on ABC: Maz Jobrani Takes Over Your Tube