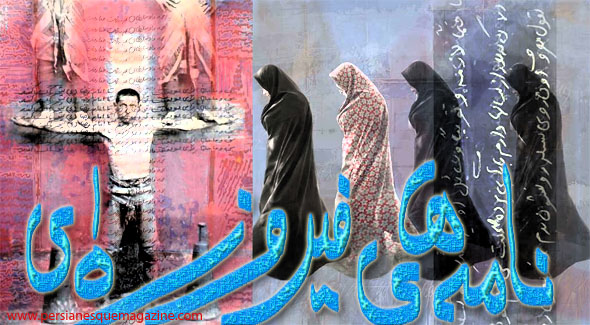 L to R, Kourosh Salehi: Pahlevan, Once Upon a Place

Kourosh Salehi’s, Turquoise Letters, will be at the Idea Generation Gallery, London, from 10 to 16 December 2009.

Showing a collection of his paintings and film installations at the Idea Generation Gallery, East London, 10 – 16 December 2009, UK-based Iranian artist, Kourosh Salehi, is part of a group of post-revolution Iranian artists who have merged East-Western traditions to articulate a new language of exile. This exhibition, a collection of paintings and video art, surveys the most recent work of this important painter.

Salehi’s films, many of which were shot in Iran – and which in the past have led to his arrest – are both intense and dreamlike, evoking longing and reconciliation. They show a temporal distortion of memory, and speak of the process of creating a personal mythology. Each has a story to tell, and so have a more narrative based format than many video artworks.

Similarly, Salehi’s paintings narrate an emotional severance from people, places and time. They tell of a personal journey, patched together and re-told with passion and candour. Images from the time of the Qajar dynasty to the early days of the Iranian revolution are digitally collaged and painted to create works that are vivid in tone, yet layered with vintage imagery. The viewer is placed as the protagonist of the narrative, and engages in a dialogue with the ghost-like characters on the canvas. The obscured letters which overlay the canvas, further engage the viewer, as Salehi exhumes old photographs and correspondence.

Collectively, these works illustrate Salehi’s approach to painting, as he draws on filmic conventions to generate an eerie but engaging narrative where, like a long held silence in a melody, the missing pages play a significant role within the plot. The story is not just about a journey, but how part of it was lost.

Candlestar is an innovative London based cultural consultancy.  We work with a wide range of artists from Europe and Iran, to bring both emerging and established talents to the European and US markets. For more information, visit: candlestar.co.uk or contact; info@candlestar.co.uk.