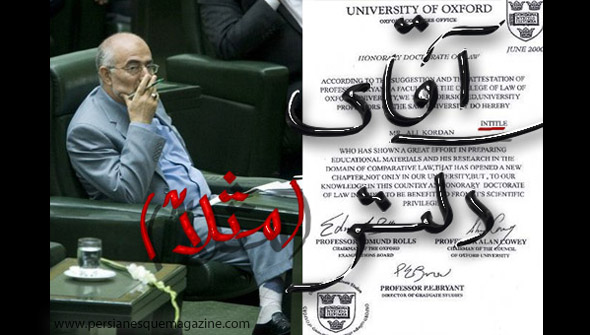 Some say that “titles are handed out like candy” in Iran, especially (and unfortunately) in certain bureaucratic circles.

But to forge an academic document (we mean degree) from Oxford University claiming that you got an honorary doctorate, might be pushing it.

In particular… when you don’t even bother to use spell check.

Ahmadinejad’s chosen one for the Minister of Interior post, Dr. Mr. Ali Kordan, came under fire during his confirmation debate in the Iranian parliament, when MPs began questioning his qualifications and the doctorate in law he claimed to have received.

Kordan, whose term as Minister of Interior only lasted approximately four months, went as far as releasing a document stating that such a degree had been awarded to him in June 2000 with three Oxford University professors as signatories, while the word “entitled” was spelled “intitled”.

The document stated that supposed doctoral certificate reicpient, “has shown a great effort in preparing educational materials and his research in the domain of comparative law, that has opened a new chapter, not only in our university, but, to our knowledge,in [the United Kingdom].”

Urban Dictionary has caught onto the faux pas and has even deemed Kordan his own entry in their online dictionary: “Kordanification; The process of receiving fake degree, especially from a prestigious university (e.g. Oxford). The relationship between happiness and telling a big lie. A method in order to gain self confidence.”

On August 11, 2008, Oxford University denied giving Kordan the honorary doctorate of law (or any other degree). And all the hype around Kordan then resulted in a call for an investigation into the credibility of the degree, which led to another revelation: Kordan “did not receive two other degrees he had claimed, a bachelor’s degree and a master’s degree from Iran’s Open University.”

In the end, the Iranian parliament voted and stripped the doctor-wannabe of his title in 2008.