In Solidarity with Iranians: U2 and Jay-Z at 2009 MTV Europe Awards in Berlin 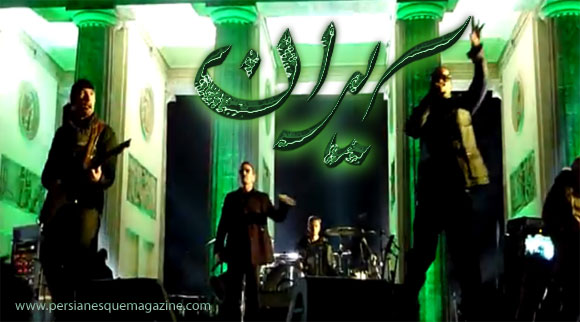 U2’s efforts to be heard in Iran and by Iranians as a supportive outside voice during their concerts this year, we feel, secures their place as the official front runner, as far as musicians who have supported Iranians and their plight, in the aftermath of the Iranian election.

Jay-Z’s decision to join the cause, and support the Iranian people’s fight for freedom and their basic human rights, can only be deemed as: dignified, compassionate, and hella’ hovafied!

However, his appearance on the stage with U2 performing Sunday Bloody Sunday in front of the Brandenburg Gate in Berlin, Germany on November, 5th, 2009 at the MTV Europe Music Awards 2009, was not the first time Jay-Z has gone “Green” in support of Iranians. Check out the imagery and noticeably green-lit music video featuring young people with their faces covered, à la the Iranians’ choice of garb in their noble fight against what they felt was a rigged election in Iran this past summer, for the pertinently-named: Run This Town video with Rihanna and Mr. Microphone Stealer himself; Kanye West, and you’ll see what we mean.

Recent further unrest, that has resulted in the Iranians’ attempt at transcontinental communication with President Obama via their latest clever slogans: “Obama, either with them or with us”, and “Not Gaza, Not Lebanon, Republic of… Iran”, has left us even more anxious and eager to see something happen, than we felt at the peak of the sorrow, anger, and helpless state we were in while masochistically watching the almost-by-the-second-footage of the violent unrest flooding out of Iran by citizen journalists and into the electronically woven web that connects the world.

Watch U2 and Jay-Z break it down below:

Next post Iranians Rank High Amongst Planet's Most Hospitable

Green Solidarity: U2 Reaches Out to Iranians at Rosebowl Performance