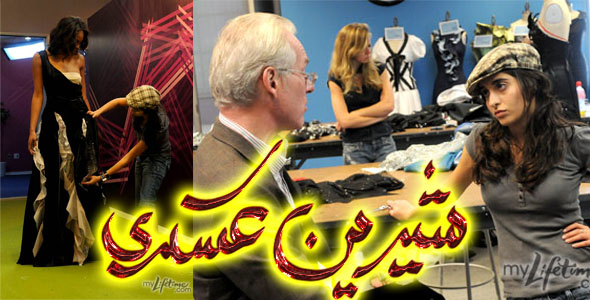 L to R, Shirin Askari working on the dress that got her eliminated from Project Runway, Tim Gunn & Shirin Askari in the workroom -- Images via LifetimeTV

We know that you’re just as disappointed as we are about Iranian designer, Shirin Askari’s early departure from Project Runway’s sixth season, on episode 9 (Sequins, Feathers and Fur, Oh My!) of the show on LifetimeTV.

It was a shock for Iranian viewers to see the talented young designer get eliminated far before it was her due time to go. (We were  actually anticipating watching her showcase her designs at the coveted Fashion Week show and season finale of Project Runway.)

Below, enjoy Shirin’s exclusive chat with Persianesque Magazine about her time and experience(s) on the show.

Do you feel that your elimination was justified?
Well I was the first one to say that I lost myself in that challange. However I don’t think that it justified sending me home. It was pretty hard standing up there with two people that had been in the bottom several times and be the one to go home. The only times I had been on stage was when I was in the top so going home was really tough.

Do you feel as though you were edited to fit a “character” on the show, or do you feel as though they showed the “real” you?
Well whenever they started showing me as the girl who was talking to herself and making a lot of noise is when I thought they were creating a character. I’m not gonna lie I do talk alot and some people might say I’m loud for such a little person….but in my defense nobody talked!! Everyone was always so serious, not making any noise and I can’t work like that… its not like we had music!

Do you feel that it was your time to go?
I learned a long time ago that everything happens for a reason…I’m not going to live always looking at the past and wondering why?! You drive yourself crazy doing that…trust me 😉

How was the overall experience for you?
Overall it was a mentally, physically, emotionally exhausting experience. There were times I just wanted to cry because of the stress and pressure…but I wouldn’t trade it for anything in the world. 🙂 It was truly something that made me not only a stronger designer but a stronger person as well. I will never forget it.

Would you do it again if asked?
HA. I don’t think it would be the same experience going into it again and knowing what to expect so probably not. Been there done that…time for something new!!

Who do you predict will win?
Well my prediction of myself is shot! So I’m at a loss… 😉

Who do you think deserves to win?
Honestly the people who I think would have put on an interesting show at Bryant Park like Ari, Malvin or Epperson have already gone home.

What’s next for Shirin?
Currently I have a line of signature pieces you can buy online at shirinaskaristore or select stores. I’m doing a lot of custom wedding gowns and working on a full collection that I will show in February for Fall 2010. I feel blessed and thankful to be able to do what I love.

Next post My Relationship Status with Iranian Music: It's Complicated

Previous post Ramin Karimloo: The Phantom of the Opera