Fearlessly Deep: Interview with Johnny B. of Electric Black 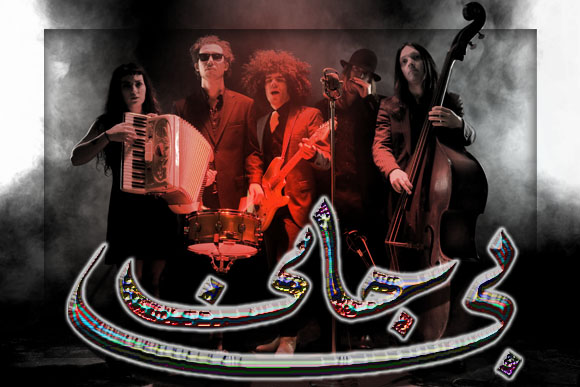 In addition to singing with Freedom Glory Project–a band he co-founded with members of the Iranian band, Hypernova–Johnny B. sings and writes for his own band, Electric Black.

I caught Electric Black live at the launch party for their new CD, on the Lower East Side at Rockwood Music Hall in  Manhattan.  Seeing Johnny B. perform onstage together with the female accordion player, female guest singer, male guitarist, male harmonica player, male upright bassist, male trumpet player, and male drummer–before a mixed audience, in a public venue serving alcohol–was a reminder I was not in Iran!

Later, I asked Johnny B. a few questions:

JJ:  Are both your parents Iranian?
JB:  Yes, Shirazi.  They met in the underground, fighting Khomeini.

JJ:  Shiraz is where I’d want to live, if I lived in Iran.  It’s a more Liberal town–and Hafez is from there.
JB:  And Rumi.  I’d like to go there too.  Haven’t been back since I left.

JJ:  Do you read Iranian poetry?
JB:  I used to read a lot of it, but I can’t read Farsi.  English translations get really tired after awhile.  You can feel it’s just not right.  Poetry rarely translates.

JJ:  That’s true.  When I visited Hafez’s tomb, I wanted to photograph some graffiti on the wall outside.
JB:  Why didn’t you?

JJ:  Our guide told me not to, because it was Mujahidin.  Were you raised religious?
JB:  I  was raised without God, left to discover that for myself–thank God, haha!  Bothmy parents are, and were, very radical.  Really, if I was raised anything, it would be a Red diaper baby.  But my folks encouraged me to be myself and discover life and truth on my own terms, through my own mistakes and travels.

JJ:  You mention the Devil in your lyrics.  Do you believe in the Devil as a metaphor, or as an actual figure or force?
JB:  I feel the Devil is the human ego… nagging for things it does not need nor could digest.  There is no Devil, only actions founded in fear.

JJ:  Fear of…?
JB:  Fear in its most concentrated form does not need focus.  Fear is a crisis of conscience.  That’s why governments and powers at large use it as their cornerstone tool of suppression of the greater human potential.

JJ:  There are lots of fearful things going on since the election in Iran.
JB:  Yeah, but fear wears thin.  It takes a long time, but eventually it does.  All human beings ultimately wish to be free.  And if they can rid themselves of the impulse to react to their fear, then they realize an internal liberation no army could destroy.  That is what is happening in Iran.  People just aren’t scared anymore.  Now it’s the ones who hold the power who are filled with fear. That’s why they are resorting to torture and murder–because they are scared.  It is the last actions of a dying beast to lash out at everyone indiscriminately.

JJ:  Has anyone here in the States treated you differently when they found out you were born in Iran?
JB: Not really, because I don’t look like a typical, bomb-toting, camel jockey.  Haha.  That’s not funny.

JJ:  Your hair is too long!
JB:  Yea, and I sing the Blues.  I mean, I am very American, you know. I was raised here.  I like to think I took the best parts of both cultures and left the bad.  I know that’s not true, but I like to think it.

JJ:  What is it like to be a romantic man?
JB:  I am romantic?  Haha, my girl friend would disagree.  I meant to write, “girl friends.”  Haha.

JJ:  Well, you know, you are a star!
JB:  Not yet, hon’.  Not yet.  Doubt I ever will be, nor do I think I want to be. I think fame tends to destroy most artists. I really want a middle class artistic career.  If I can make $100,000 a year by playing music, I will be very happy.  I don’t care if the world knows my name. I would rather have a small but solid fan base that can grow with me as an artist, rather than millions of fans who like me because of clever marketing and my hair.

JJ:  Your lyrics are full of romantic longing, in the grand tradition, (quoting Reign The Night):
“When I first met you, you were so young, eyes of almond brown, and hair so plainly done. Through your tears and misery, I stood by your side. Then it came my time to cry, you pulled away like the tide.”
JB:  Yeah, well that song is very personal.  I wrote that after some heavy changes.

JJ:  (Quoting Johnny B.’s lyrics to One More Song For the Road.)  “The moon is silver, the stars are shattered mirrors.  I see my reflection there, but the image is not clear.”  That reminds me of mirror mosaics in Golestan Palace, Tehran.
JB:  All art is a mirror.  Good art makes the spectator experience themselves, bad art make the spectator experience the artist… Do you mean romantic in the literary sense?

JJ:  Yes, I mean it in both senses.  Baudelaire drank a lot, took drugs, had a lot of sex, and he was Romantic in a literary sense–as a comparison.
JB:  If you are going to quote One More Song For The Road, and say I’m romantic–please don’t leave out the line where I endorse unprotected sex.

JJ:  What’s up with that?!   And then you give away condoms as Electric Black swag!
JB:  Paradox is the lock and the key, the path to truth…in poetry anyway.

JJ:  Pandora’s box!
JB:  Well, that’s something a little different.  But, yes, I like that metaphor too.

JJ:  Jung said that what is inside the box is a nude figure, symbol of sexuality–unrepressed desire.
JB:  Jung was God.

JJ:  How would you describe Electric Black music?
JB:  The Most Punk Rock Country-Blues Chamber Orchestra On Earth.

JJ:  Will you ever let Iranian music come into it, or never?
JB:  I already have, just haven’t released the song yet. We recorded a song called “Heading Out East” that is set for release on Oct 20th that has setar and daf, as well as violin, harmonica, accordion, cajón, guitar, and upright bass.  All instruments are acoustic, recorded entirely live.  We did it the way Elvis and Johnny Cash and all those guys used to track–circle of mics.  The song kills.  It’s a Bonnie and Clyde story, about two lovers on an idealistic binge.

JJ:  Can’t wait to hear it!  I like that you have women musicians playing with you, too.
JB:  I don’t really see race, sex, or religion when it comes to music.  I just hear what the player can do.  That’s how I decide.  Melissa (accordion/keys) has a really strong classical training that really gives us the chamber orchestra edge.

JJ:  Is there anything else you want to say for the interview?
JB:  The band is planning on releasing a new single every month for a year instead of putting out EP’s or records.

JJ:  Distributed through iTunes?
JB:  Yes, and Amazon, and others too!  It’s very sad that our society has become so fragmented that they don’t have the attention span to listen to a full record anymore.  Because it is through the LP that an artist can take you on a journey, and really try to show you an different POV.  But none-the-less, the Zeitgeist is changing, and we are changing with it.  So singles it is!!  You want to ask me anything else?

JJ:  Given the choice, do you prefer smoking cigarettes or hookah?
JB:  Haha, Cubans, baby.

JJ:  Please describe the difference between the current Green Iranian movement and the Red movement your parents were part of.
JB:  Well, that was a Communist Revolution. It was, you know, in the middle of the Cold War–and tied in to all that superannuated energy. The Green movement is not a Revolution.  It is, at its core, in my personal belief, a Civil Rights movement. The people of Iran want the basic freedom to be able to choose the destiny of their country through democratic means.