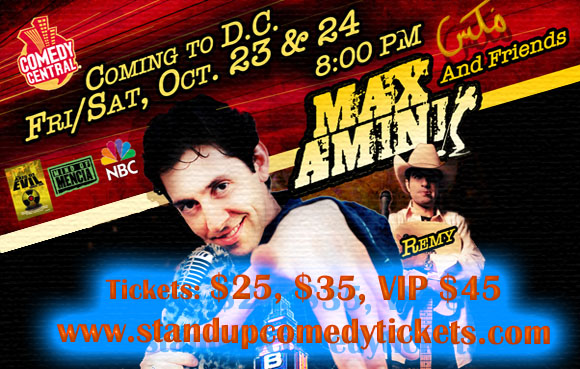 Max’s “friends” include: Remy, (a local Virginian–Arlington to be exact–and is the famed YouTube content creator behind viral sensations like; “McDonald’s: The Rap”, “Hey There Khalilah”, “A-R-A-B”, “Arlington: The Rap“, and “Tabbouleh Song”) Vincent Oshana, and Monrok.

Iranian native Max Amini’s show is a unique style of physical and high-energy hilarity.  Max’s comedy “stands out in stand-up“.

Having appeared at every major venue in Los Angeles (and across the US) and on Comedy Central’s Mind of Mencia, Max has also toured with the Axis of Evil Comedy gang. You may have seen him on the NBC hit show “Heroes”, but keep an eye out for him on the screen as he’s  just wrapped his first leading-role in the independent feature, “Beer Pong”.

Trust us. If you live in the DC-area, you don’t want to miss this show!

Click here to buy your tickets before they sell out.