Obama’s Reaction to Iranian Election: “Iranian voices should be heard and respected” 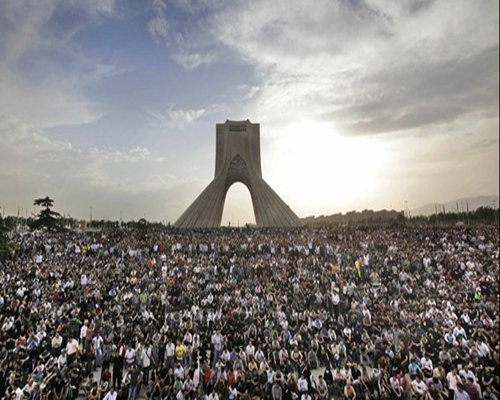 Finally reacting to the Iranian election aftermath, President Obama said, “obviously all of us have been watching the news from Iran and I want to start off by being very clear that it’s up to Iranians to make decisions about who Iran’s leaders will be… we respect Iranian sovereignty and want to avoid the United States being the issue inside of Iran – which sometimes the US can be a handy political football – having said all that, I’m deeply troubled by the violence that I’m seeing on television.“

Addressing the Iranian nation’s 70 million people President Obama said, “I think that the democratic process, free speech, the ability of people to peacefully dissent – all those are universal values and need to be respected. And whenever I see violence perpetrated on people who are peacefully dissenting, and whenever the American people see that, I think they’re rightfully troubled – my understanding is that the Iranian government says that they’re going to look into irregularities that have taken place, we weren’t on the ground we did not have observers there, we did not have international observers on hand so I can’t state definitively one way or another what happened  with respect to the election but what I can say is that there appears to be a sense on the part of people that were  so hopeful, and so engaged and so committed to decomracy who now feel betrayed and I think it’s important that moving forward whatever investigation take place are done in a way that is not resulting  in bloodshed.”

His specific message to the Iranian youth, ”we do not want to make any decisions for the Iranians but we do believe the Iranian people and their voices should be heard and respected.”

Next post Obama's Reaction to Iranian Election: "Iranian voices should be heard and respected"