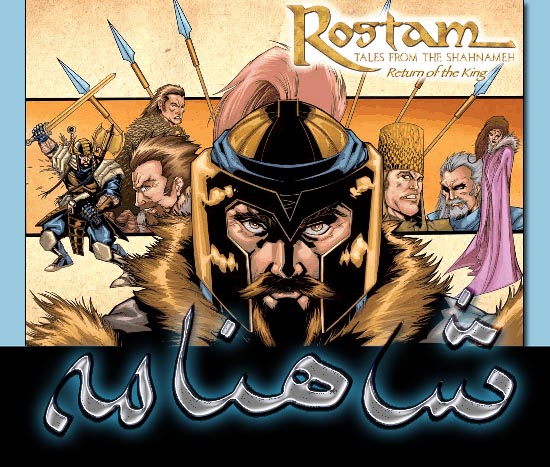 The Shahnameh (Book of Kings), was written by Persian literary-master: Ferdosi (also spelled Ferdowsi). The Persian literary masterpiece, amassed over several decades in the tenth and eleventh centuries, is a collection of some 60,000 couplets full of Persian Miniatures created to illustrate scenes from the Persian epic, and has now reemerged in the form of HYPERWERKS‘ highly-entertaining comic book  series: Rostam – Tales from the Shahnameh.

Born in Tus, Khorasan, Ferdosi/Ferdowsi was the son of a wealthy landowner. Encyclopedia Britannica notes: “The Persians regard Ferdowsi as the greatest of their poets. For nearly a thousand years they have continued to read and to listen to recitations from his masterwork, the Shah-nameh, in which the Persian national epic found its final and enduring form. Though written about 1,000 years ago, this work is as intelligible to the average, modern Iranian as the King James version of the Bible is to a modern English-speaker.” While Wikipedia notes that one of the many sources for Persian pride: The Shahnameh, “was originally composed for presentation to the Samanid princes of Khorasan, who were the chief instigators of the revival of Iranian cultural traditions after the Arab conquest of the seventh century.”

Enjoy our chat with Cameron Douraghy who tells us that his comic book series is made for “all Iranians growing up in diaspora who want to get back in touch with these great stories, parents who want to introduce the stories to their teens for the first time, comic book fans who appreciate great stories, and comic art fans who appreciate great art.”

And although your kids, nieces, and/or nephews may benefit from (and be entranced by) the Book of Kings comic book version, Cameron says that the series is ”primarily enjoyed by adults, as they cover mature themes and stories.”

Click here to buy your copy(s) of the revitalized version of the epic tale that is sure to enhance you library!

Click here to watch a compilation of the series’ animated video-shorts.

When did you come up with this concept of bringing Rostam to virtual-life via a comic-book style series?
In 2000, while working on the “Truth” anti-smoking campaign, we created a customized comic book targeting Asian American teenagers who smoke. The project proved to be very successful with more than a million issues being printed and distributed. It was during the execution of this project that we decided to express the action adventure stories we had grown up with from the Shahnameh, into this art form.

What made you decide to use Persian sound-text-effects?
We knew that a large number of our fans would be Iranians living and growing up in diaspora. It was our intention to insert some small morsels into the books which would give them a little extra entertainment over the non-Iranian reader.

The use of the Persian language is noticeably apparent in the series. What has the audience reaction been to this added feature/language lesson?
The reaction has been overwhelmingly positive. Mostly people have been amused by it as it brings a smile to their faces when memories flood back.

How much research would you say has been involved in this project?
Much more than we thought! But it has be a joyful journey.

What do you hope the Shahnameh series will do for Iranians, or the world?
We hope that we can do our small part in getting additional exposure to the works of Ferdowsi to a much wider audience, and to dispel the many common myths about us and our culture. It is important for Iranians to tell their own story rather than have others give us their (sometimes misinformed) versions.

Who would this series be a good “read” for?
Everyone of course!

How long did it take from start to finish – to complete this project?
Technically, each book (and we are working on book 4 right now) can be produced within a 4 month time period. However, our production cycles are taking longer because of the need to fund raise. We have been blessed by a couple of grants in the past, but with every new book there is a need to fund raise again. Do you know anyone who is interested?

There’s kabob and rice being served on the table in one scene. Where did your illustrator draw inspiration from to showcase such intricacies?
The three of us art-direct and edit all of the comic books; that is where he gets direction and guidance.

How were the faces of the characters decided upon?
Our illustrator Karl, does an incredible amount of research but of course in the end, he must draw upon his feelings and inspirations after reading the Shahnameh stories we select. He then, comes up with the look and feel of the characters, which we will review (and modify where necessary) and finally approve.

Is the series sold in Iran?
Not yet.

Has Hollywood knocked to start making the blockbuster version yet?
Not yet, but we certainly hope they will.

What is the Westen equivalant of the Shahnameh?
I truly believe that there isn’t a western equivalent that comes close to the Shahnameh. To imagine an equivalent to this violent and beautiful work, think of an amalgam of Homer’s Iliad and the ferocious Old Testament book of Judges and then add in the complete works of Shakespeare.

Where can people buy this set?
The best place to buy the books [is] on our website: theshahnameh.