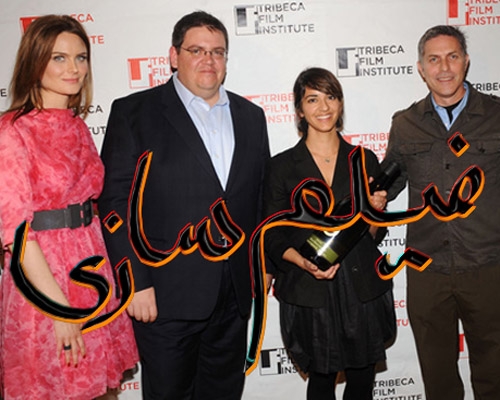 The fellowship will be awarded to one selected Tribeca All Access filmmaker to further her career and creative projects.  A total of $5,000 will be awarded in addition to support and mentorship throughout a 10-month period.  The late actress’ husband Andy Ostroy, who also serves as Executive Director of the foundation, and advisory board member Emily Deschanel presented the award to Ana Lily Amirpour for “The Stones,” in which class, tradition and love all violently collide in modern day Tehran, as a young working class girl embarks on a forbidden love with a wealthy young man with fatal consequences.

“I wanted to write a story about what it’s like to be young in Tehran today, because we hear so much about Iran’s nuclear debate, politics and islamic hardliners, but there are is a new generation of progressive young people who live amidst this volatile regime and their stories are going unnoticed.  I’m thrilled that this script has gotten such recognition and support from organizations like Adrienne Shelly Foundation and the Tribeca Film Festival, and we’ll be shooting the film early in 2010, which is incredible.  It really says a lot about the interest in global cinema today.  That this type of story would get so much support in America is a wonderful thing,” Amirpour tells Persianesque Magazine exclusively.

“It is truly an honor to be partnering with the Tribeca Film Institute on this new fellowship,” said Ostroy. “Adrienne lived and worked in Tribeca, so it’s an especially meaningful addition to her growing legacy that the foundation that bears her name will be helping other talented women achieve their own filmmaking dreams through TAA.” Ostroy is producing Ms. Shelly’s follow-up script to her 2007 hit film WAITRESS, SERIOUS MOONLIGHT, which is directed by Cheryl Hines, stars Meg Ryan and Tim Hutton, and has its world premiere April 25th at the Tribeca Film Festival.