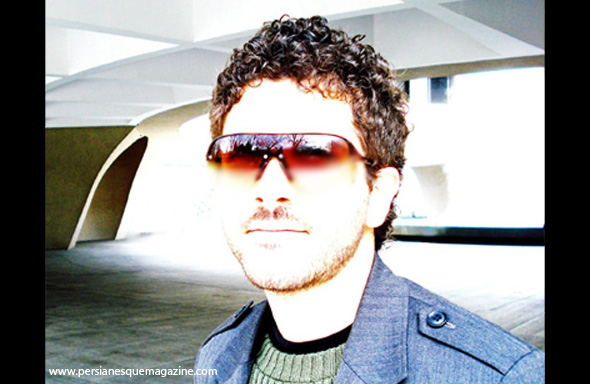 Art is up for interpretation. So what would you discern from a series of paintings featuring covered women in action?

The reactions are mixed, but some are just surprising. Eric Esmailzadeh Parnes’ work is current and partly draws inspiration from ideological-iconography in some places. One of his works – which sold for $8,000 – of a woman dressed in a chador while holding a gun, now sits above the bed of one of his customers, whose perception of the piece was in one word: “empowering.”

Eric, initially taking the academic route, soon realized that art was his passion. Lucky for us that he did, as we now get to lay eyes on his sometimes shocking yet tamely provocative pieces. He dares to push the brush, and it shines through as layered art.

Enjoy our exclusive one-on-one interview with the modern-artist.

Where were you born?
I was born in exile in Baltimore, Maryland.

Have you ever been to Iran?
Alas I have not, although I have traveled to and around Iran, I am planning to go as soon as I can make preparations anyone want to host me?

What was the first piece of art you made?
I believe the first official piece of artwork was a masterpiece of contemporary work crafted at a mere age of 2 that was first shown in a gallery known as my mother’s refrigerator. I am still waiting for the commission split from that…

When did you realize you wanted to be an artist?
I think it’s been more of a battle internally. It’s something that compelled me, and it’s the way I output the thoughts in my mind. Looking back to my youth it’s clear that I was always leaning toward visual art, but defining it as a career has taken a long and windy path. Today everyone is an artist, and in that we are encouraged in this culture to be creative, but defining a career around that premise is more challenging. It’s been something that I knew I was

How does your family feel about your work?
Extremely encouraging. But let’s face it, good Persian families don’t want their children to be artists. Maybe doctors, lawyers or engineers. But my family has enough of them. As a result I think it made my work more meaningful in that I have had to fight to bring myself to choose a path that is more challenging.

Where do you get your inspiration from?
I have disowned my television, and only look to the news, books, and the internet. It can come from traveling, and from trying to understand how the history and the present interrelate. While I try to create things of beauty, I want things that are layered intellectually. Why can’t I have both. One thing I can’t stand about the art world is the pseudo intellectual aspects of conceptual works. In that I am proud that I did not attend art school.

What was it like growing up half-Iranian?
Is this part of my therapy session? Well technically according to Iran, I’m classified as Iranian, but for our purposes I will say that it was difficult. While my upbringing was quite cosmopolitan (we always traveled) by growing up in a removed urban environment I was always considered “exotic” by the seemingly white American culture in Charm City (Baltimore). I was embarrassed to have anything to do with the Middle East, and would lie about my family or my background. Does I’m Italian or Greek sound familiar? Now of course I know it’s not me that should be embarrassed. I have a diversity and cultural complexity that makes my outlook on life more enlightened and I am glad I have a relationship to a culture that has a rich past.

Do you relate more to being Iranian or American?
I think I enjoy the status of a being a citizen of the world so to speak. The ability to be accepted on a certain level and at the same time not when it comes to American culture.

What’s your favorite Iranian dish?
Since I was a kid, Zulbia or Bomia… I know its not a dish but its something I can’t resist. I don’t eat sweets but I will get a massive sugar high off of it any time it’s in front of me.

What genre would you say your work falls under?
Contemporary political, but politics is limiting in its term. I will say contemporary enlightened.

How tough is it to keep from being imitated in the art world?
Imitation is unavoidable; I just put my work out so people know I did it first. I am not afraid of creating more. If you let that influence your work then you will never be known.

What do you want your art to say to the world about Iran?
Iran is not a singular isolated entity. Its influence for better or for worse in the view of the west is what makes it so meaningful. Its cultural legacy has influenced the West in ways most are unknowing of, and its contemporary influence can serve as a artistic body of work on its own.

What has the non-Iranian reaction to your work been?
Overly positive.

How have Iranians responded to your pieces?
Overly, overly positive.

What was the crowd like at your show? Diverse?
It’s typically made up of non Iranians, but somehow at every recent show, Iranians have sprung up and have made their appearance, like moths to a flame.

Where have you showcased so far?
In New York, but I just finished an “art tour” during the major art fairs in Berlin, Miami, and New York.

Where can fans purchase your pieces?
Through STILLLIFE gallery or smaller works at ericrobertparnes.

What’s your career goal as an artist?
To actually have a career… but seriously, to create a discourse, and an esthetic that is objectively beautiful, and to be remembered for that. Our time is short here.

What’s next?
A big secret in New York, and large paintings on commercialism in Saudi Arabia, you know it’s just across the Arabian Gulf from Iran. Just kidding.. it’s always been the Persian Gulf.