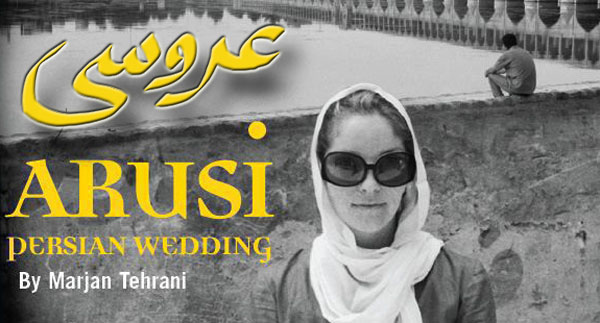 WASHINGTON, DC – As Iran’s colorless headline-led image blisters on, Iranian-Americans prove to be (more now than ever before) feeling the responsibility of correcting what is conceivably an unjust and stained perception of themselves. Through her film, ARUSI: PERSIAN WEDDING, which is an absolute optical delight, Iranian-American director Marjan Tehrani, unobtrusively shoots the attempts of her prédécesseurs… out of focus.

Tehrani, who confesses to having “felt an itching desire to study documentaries”, ended up having her first film “Her Israel” – a documentary revolving around three immigrant women; a Russian, an Israeli, and a Palestinian who are similar in age and living in Tel Aviv with very different realities – air on the Sundance Channel in 2004. And now her second film, ARUSI: PERSIAN WEDDING, will air on PBS on March 17th, 2009.

In ARUSI: PERSIAN WEDDING, the brilliant indie-filmmaker gives people outside of Iran a close and insightful look into the country and its people. The movie, which chronicles her brother Alex’s journey to Iran with his American wife, Heather, to have their own Persian wedding, is in essence, a love story. However, Iran is noticeably one of the main characters and Tehrani magically manages to surface the taboos and extent of misinformation that can lead to emotionally-charged dialogue (or no dialogue at all, on a grander scale) between Iranians and Americans, by means of her transparently-lucid lens.

ARUSI: PERSIAN WEDDING is a movie for all audiences. Everyone should experience Marjan Tehrani’s recherché ability to combine her unfeigned vision, while staying true to her brother’s story, with such balance and unexampled expertise. The universally-human and powerful message(s) in this film can only lead some would-be viewers to shed a tear or two. We know we did.

Enjoy our exclusive interview with the Aabgoosht-from-scratch-making Ms. Tehrani about her timely and highly-poised gem of a film.

*If you live in the DC-Metro area, click hereto see how you can get tickets to watch this movie at its Washington DC screenings in Februrary. Click here to watch the trailor for ARUSI: PERSIAN WEDDING.

Sanaz Khalaj-Santos: Where were you born and raised?
Marjan Tehrani: I was born in Berkeley, and raised in California until I moved to New York.

SKS: Where did you go to school?
MT: Berkeley high school. We had four-thousand students and it was very diverse. I also went to UC  Santa Cruz where I studied Community Studies and Activism – it was a mix of working within the community and studying social change, and I got my MFA from CUNY in documentary films.

SKS: What was it like growing up half Persian?
MT: Well, I have a very interesting background. My mother passed when I was eight – my dad and mom split and he was in Iran a lot – but when she died, my father moved in. And, even though I had already experienced Persian culture, it came in quite heavy with him. He was very open with us, my brother and I, and had been in the states for so long but we had a very different reality inside our home vs. outside. It was interesting to try and acclimate. I learned how to cook when I was young , and took in Persian culture mostly through food, events, and parties.

SKS: How hard was it to start your own film production company, Trufilms?
MT: It’s still hard today having a film production company but I just, have gone for it, each step. The way I work is: I’ll have an idea, then I’ll start something, and you know, it has generally fallen in place, but I’m continuously building it up. It’s a lot of work because you have to balance the business side and work on production at the same time. There are inherent challenges in that.

SKS: If you had to describe the message in your movie in a few sentences, how would you word it?
MT: The film, for me, is really about the personal identity struggles people experience, and how we bring that with us once we’re in relationships with one another.  Being Iranian-American is like being of any mixed-background.  You have access to two cultures. Being Iranian-American has specific challenges. There’s no place where you belong at the end of the day and the history is so weighted on the personal, it’s constantly in your face. ARUSI is a love story about intercultural marriage. It’s about Alex as an Iranian-American who has always felt the weight of the larger history of these two countries. I had many different people tell me that they identified with his character’s struggles.

SKS: Can you share any highlights or experiences from making this film?
MT: Well, I actually ended up interviewing three of the candidates that were running in the election that year: Larijani, Rafsanjani, and Rezaii in Iran during the filming of Alex and Heather’s story. Though when I went back to Iran – I wanted to do some follow-up shooting – a guy named Ahmadinejad got elected. I got some great footage, but ultimately I wanted to make the film. All the history was starting to take over. Nevertheless, I got this incredible material about their policy and what they planned to do. What was fascinating was that they all said pretty similar things. I talked to them about missed opportunities with the U.S. and major pivotal moments, starting with Mossadegh and the Shah, and they began to talk about how we’re talking about the same thing over and over. It’s programmed dialogue. I will say that one of the craziest experiences of my life was that I was the first woman to film on the soccer field at Azadi Stadium. That was pretty interesting. I was naïve and nonchalant about my access. It was pretty intense.

SKS: Can you read and write in Farsi?
MT: No.  I’m sad about it. I took Farsi classes and learned quite a bit – everybody thought I was so cute, because people really want to help. Iranians really want to help you when you want to learn Farsi.

SKS: How were  you able to get permission to tape in Iran?
MT: I worked with an incredible production coordinator named Tahoora Abolghassemi. She had worked with so many filmmakers in Iran like Dariush Mehrjui, and I was lucky enough to get her info and she helped with the permit, and any situation that came up; guards stopping us, anything. She was just incredible.

SKS: How did making this film change your perception of Iran? If at all.
MT: I would say by no means have I bought into the propaganda,  and it’s been very frustrating growing up here, but, just going there and really getting to be with the people – the youth… there are so many similarities that it helped me shift my view. There are so many wonderful aspects that you have no exposure to here. Going to Esfahan takes your breath away, you can’t even explain it to anyone.

SKS: What do you hope your audience walks away with, after seeing your film?
MT: I really hope that, they walk away with a clear understanding of past events between Iran and the US and, with that clarity, realizing that there’s not necessarily one side to blame. You can’t blame one side. There have been events that have happened on both sides that are complicated. This has been the reason for stunted dialogue for so long. Let’s move forward and create a new relationship for these two countries. I want for people to really experience Iran… for them to meet the people Alex met and, for them to see a different perspective of Iran.

SKS: Who should see your movie?
MT: Anyone. Of course I’d love for Iranian-Americans to see it because they can identify with it – but I would really like Americans to see this film. Especially because now all you hear are news stories that have nothing to do with the Iran I experienced.

SKS: What do you hope to accomplish in your career?
MT: I hope to continue to make more films and tell more stories that really touch people and shift people’s thinking about certain things.

SKS: What’s your favorite Persian dish?
MT: That’s a hard one. Tahcheen. A good tahcheen. Oh, and ghormeh-sabzi and fesenjoon – I love them all but am deprived.

SKS: Any other projects on your desk, currently?
MT: We have a film that I produced and my husband directed, “P-Star Rising” and we’re excited about it. It’s about a family, a girl, raised by a single father who decides to be a rap star. The film covers a four-year journey about the ups and downs of life and intimate family dynamics: growth and transformation. We also have a hand-full of projects on the table about Iran and the coup d’état. We are working with a fictional script.

SKS: How can we stay current on your work?
MT: Visit: Trufilms.com or visit our ARSUI: PERSIAN WEDDING fan page on Facebook.

Operation Ajax: The Story of the CIA Coup that Reshaped the Middle East