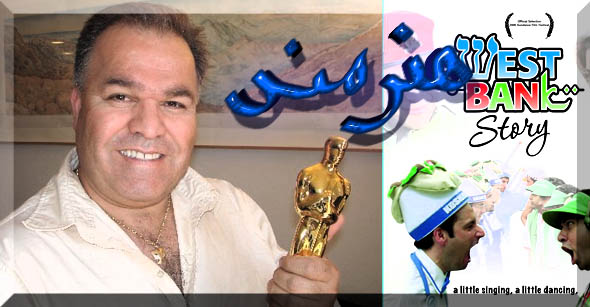 As part of the cast in the Academy Award winning film West Bank Story, Anthony Shams is one of the nicest, funniest, and most genuinely down to earth Iranian-American comedians we’ve come across, to date.

His unassuming charm and warm smile are just a couple of things we really liked when we sat down to have lunch with the actor/comedian.

If you haven’t gone to see Anthony Shams perform live yet, then you’re missing out! Enjoy our exclusive interview below.

How did you get into stand up?
I played the role of stand up comedian in a play I had written, produced, directed and acted called “A Beginning To An End“. One night the two actresses in the play were not feeling to well that week, if you know what I mean, so I decided to stretch my stand up and people loved it. When I realized I can make people laugh all by myself, I decided to open the stand up chapter in my life. Also we, Iranians, did not have Stand Up Comedy in our culture. Some may disagree with me but I do not consider telling Rashti or Torki, etc. jokes as Stand Up Comedy. That is just plain racism against the Tork and Rashti people.

How have Iranian-American audiences been reacting to your bit?
Iranian-American audiences have been more than complementary and over generous with their support. Iranians who have not opened their luggage and refuse to learn English ( Still after 30 years thinking they are going back to Iran for the next Norooz), They have occasionally been problematic. They complain about the 40% English language I use in my show which I have a good reason for. Everyone knows my target audience speaks Farsi and English. It is printed in BOLD on my poster & tickets.

How have non-Iranian audiences been reacting?
Words cannot begin to describe. Americans go to a comedy show knowing they are there to laugh. However; some, not all, Iranians go to comedy shows and create] the following situations:

A) Some act like they are attending a funeral and do not laugh.

B) Some sit there and look at others and as soon as others laugh, they say stuff like, “Looook at heeem, heeez mout  is open like a donkey“

C) Some go to a comedy shows and make it a challenge against the comic and say, “Let us see if he can make us laugh first!?“

But I welcome all because they create a challenge for me and that is when I am at my best.

Who are your favorite Iranian-American comedians?
Omid Jalili and Maz Jobrani.

Who are your favorite American comedians?
Robin Williams, John Leguizamo, and Jay leno.

Who is your favorite old-school Iranian comedian?
I do not have any.

When was the first time you were on film as a paid actor?
1986. I played the role of a florist in [the movie] No Way Out with Kevin Costner, Gene Hackman. It was filmed in the old post office building in Washington D.C. My only line in the movie ended up on the cutting room floor just like Kevin Costner’s first acting debut in The Big Chill. You only see a 4 second shot of his hand as a dead person.

How did you land the role in the Academy Award winning film: ‘West Bank Story’?
By auditioning the hell out of it with the director Ari Sandel. I found out about the movie [through] Noureen Dewulf, an actress who played the role of my daughter [a] commercial and the role of Shohreh Aghdashlou’s daughter in American Dreamz. I guess [through the] magic of movies, Shohreh and I are married and share a daughter together named Noureen (just kidding).

What’s a story you can share with us from the set?
There were no funny stories. My friend’s daughter was visiting from Germany and she asked if she could be in the movie. I mentioned it to Ari and she was in as an extra. Since there was no pay involved, at the end of the shoot, I gave a $20 bill to Adam the assistant director to give her as a token of his appreciationfor her hard work. She has framed that $20 bill in her room in Bremmen as a sign of being in a movie that won the Academy Award.

What’s a touching or life-altering moment you experienced on the set of “West Bank Story”?
A powerful line written by Ari Sandel and delivered by Fatima (Noureen DeWulf) to the Palestinians and Israelies who are fighting each other. She says, “Is this what you really want? Is this how you want to live the rest of your lives? Then you deserve each other.”

Oh My God!!! Some religious fanatic Persians immediately called me Kaafar (Atheist) . You do ten good things, nobody notices. But God forbid, you say one thing that is against their “khoraafaat”, then you are the devil. Don’t get me wrong, I have respect for people who are Moteddayen (religious) not Mote’asseb (Fanatic) in any religion. There is a big difference.

Can you tell us a funny joke?
Roses are reddish, violets are blueish, had it not been for Jesus… we would all be Jewish

Have you had roles on TV?
Yes.

Which did you like the most and why?
A letter To the Homeland. It dealt with clash of cultures.

What is your favorite comedy movie of all time?
All of them because laughter is essential to one’s health.

What is your favorite thing about being Iranian?
Just the word Iranian says it all. There is no other thing in the world that compares to it. I am proud of being a Farsi speaking Person of Aryan race.

Chello-Kabob or Ghormeh-Sabzi?
Both in double portions. Humm. . . Who am I kidding? I eat anything that is not bolted to the ground.

Are you currently working on any projects your fans would like to know about?
My stand up shows are on going. If anyone [wants to see my act], they can send me an email with their email address and the name of their state only so they can be added to our email list. I also have started my new one man play called “A Kotak Moment” which is about life, love, and relationships.

Where can your fans see your tour schedule?
I am on Facebook & Orkut under Anthony Shams.