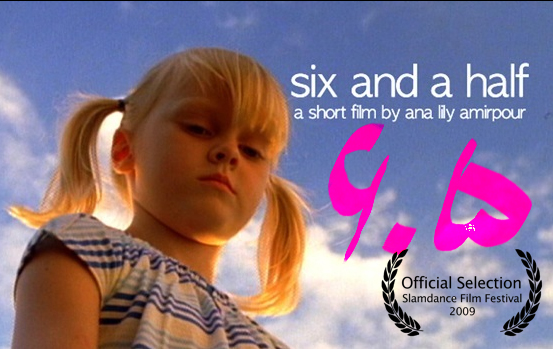 Park City, Utah – Every January the film industry gathers in Park City.  The feeding-frenzy of distributors, critics and journalists comb both Sundance and Slamdance Film Festivals looking for the next indie-blockbuster.

While there is undeniable talent waiting to be noticed amidst these feature films, what about the hundreds of short films that exist in their shadows? The art of short filmmaking is truly it’s own medium.  Faced with minute budgets and resources, short films not only showcase concise storytelling that should engage and compel you in just minutes.  These films also demonstrate the resourcefulness of their filmmakers, young unknown artists who are often doing things with their own bare hands, whatever the cost.

One such short film selected for Slamdance this year is SIX AND A HALF.  Written an directed by Iranian/American filmmaker Ana Lily Amirpour, SIX AND A HALF takes us on vivid journey into childhood and the sometimes brutally capricious nature of children, and all in just 5 minutes.  The film is about a six year old girl, played by Harley Graham (The Bold and the Beautiful), who tries to catch a frog in a pond and when she’s hurt in the process, blames the frog for her accident and goes back for revenge.  Amirpour crafts the tale with subtlety through beautiful imagery, innovative use of sound and non-dialogue driven storytelling.  The film tackles the notion of ‘power’ and the fact that there is always someone bigger, or smaller, than we are.  Described by the festival programmers as ‘Joyous’ this is one short film not to be overlooked.

On the horizon for Ana Lily Amirpour is her debut feature film, THE STONES, a volatile drama about youth culture in modern day Tehran.  Winner of the 2007 Bluecat Screenwriting Competition and 2009 Sundance Lab Finalist, the project is being produced by Gordy Hoffman (LOVE LIZA) and is slated for production in 2009 with Amirpour attached to direct.

Producers Ehren Parks and Sina Sayyah are currently shopping the feature comedy, THE BALLAD OF GUNNER BLEU, set in the world of the Texas music industry.  A short prequel was shot this fall on location in Austin, starring country music legends Dale Watson and James M White.

SIX AND A HALF screens with feature film NOT FORGOTTEN, the highly anticipated thriller starring Simon Baker and Paz Vega and directed by Dror Soref.   2009 marks the 15th anniversary of the Slamdance Film Festival.